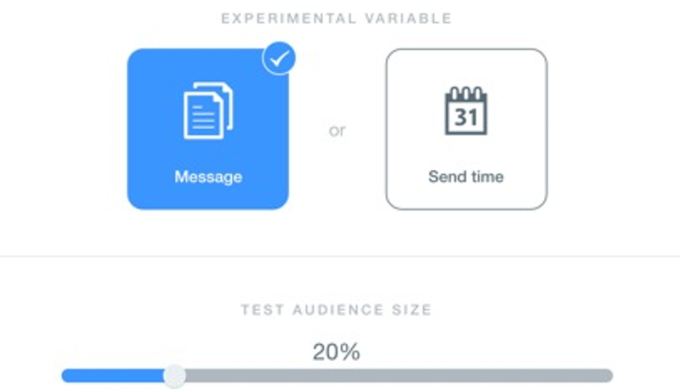 Facebook subsidiary Parse is rolling out Parse Push Experiments, a new feature aimed at marketers and developers whose apps use the Parse SDKs that let them A/B test different messages and times for push notifications that go out to mobile devices.

The update works with apps that already use the latest versions of the Parse SDKs with no changes needed on the developer’s side of things. Instead, there’s now an option on the push composer in the Parse web console that lets you access A/B testing.

Parse says that in the last month, it sent out 2.4 billion mobile push notifications. Having A/B testing built into a distribution system that big will have a huge impact on how and when millions of people decide to engage with their devices.

For that reason, it’s interesting to look at what Facebook is doing with its developer- and marketer-focused efforts. At a high level, Facebook seems to be looking to become the layer in the app ecosystem that not only helps users find new apps that fulfill their needs, but also brings them back in a way that Google’s web search can’t match (though that could change in the future based on whether or not developers embrace Google App Indexing).

Facebook has myriad ways to connect users and apps. You’ve got the surprisingly effective mobile install ads in the News Feed, backed up by re-engagement ads powered by App Links, which reduce the number of steps required for a person to spend money — which you can verify in Facebook’s provided analytics.

Want to approach potential users from another angle? Get in front of them by putting yourself out there on the Facebook Audience Network. If you’re not having trouble getting users to open your app but aren’t quite landing the conversion rates you’re hoping for, you can avoid bugging users with obnoxious notifications by testing different messages across a small subset of their audience, with effectiveness again measured within Facebook-provided analytics.

By approaching this one fundamental problem developers have from every angle it can throw engineers at, Facebook presents itself as the go-to provider for mobile engagement services. Across all of its efforts, Facebook is working towards (and succeeding at) telling users where they can spend money — something that will only become more valuable as new developments like Apple Pay remove friction from the process of actually spending money on digital and physical goods from within mobile apps.