Editor’s note: Laetitia Vitaud is a blogger, coach, teacher of U.S. politics in France and passionate about the digital transition of our economy.

The French still dream of humanoid robots and electric sheep. Swedish TV series Real Humans, broadcast on French-German TV channel Arte, seduced a surprisingly large audience in France. And flagship robotics projects are proudly promoted by the president himself. Nao is one of those flagship robots, an autonomous programmable humanoid robot developed by French company Aldebaran Robotics. The same company also created Romeo, which it exhibited in Lyon earlier this year.

Romeo is supported by Paris business cluster Cap Digital and is destined, like Real Humans’ fictitious “hubots” to help the elderly and the sick regain some form of autonomy.

These are the types of robots used to showcase France’s engineering prowess. Yet a few extra decades will still be necessary to produce robots that can perform half as much as a human maid. 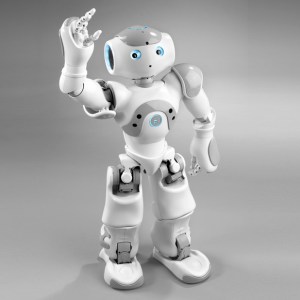 “It is comparatively easy to make computers exhibit adult-level performance on intelligence tests or playing checkers, and difficult or impossible to give them the skills of a one-year-old when it comes to perception and mobility.” Or as Steven Pinker famously put it: “The main lesson of 35 years of AI research is that the hard problems are easy and the easy problems are hard.” This is why no robot can yet perform all of our domestic chores. iRobot’s Roomba can only vacuum the floor and will never empty the dishwasher.

Humanoid robots are a showcase, not a business. Robots shouldn’t be expected to look human, but to do the “hard” things their own way. The dedicated specialised machinery used in our modern factories (particularly in high-wage countries), fascinating though they may be, are not so new nor are they very French (one immediately has Germany in mind), but French robotics has been conquering warehouses with an increased mastery of “hard” sensorimotor skills.

Balyo‘s Co-founder Raul Bravo had this vision in 2005: “Logistics is a sector that really needs robotics.” Little did he know that in 2012 Amazon would spend $775 million to buy Kiva Systems, a U.S. company that produces mobile robotics fulfillment systems for Amazon to use in its warehouses.

Balyo’s MoveBox doesn’t look impressive nor does it look human, but it is replacing human workers in warehouses. It is designed to make any fork-lift truck into a fully autonomous vehicle. The potential market hasn’t yet been fully explored: In Europe alone, more than a million fork-lift trucks are used to move pallets in warehouses, all of which could become automated! The really promising element is that no ground infrastructure is required to use these tools.

Like warehouses, parking lots are cleared areas dedicated to one purpose. These areas can be made more efficient with robots. German company Serva Transport Systems developed an automated parking system: “279 automated parking spaces at Düsseldorf Airport can now be used via patented robots.”

In France, two researchers, Clément Boussard and Aurélien Cord, have been working on their own version of that system: Stanley Robotics is developing a solution that would be lighter and more flexible (and cheaper) than Serva’s sophisticated system, something that reminds more of Balyo’s MoveBox.

Stanley Robotics “Optipark” doesn’t require any modification of existing infrastructure and the solution can be deployed in any parking lot. The potential market in crowded urban Europe seems limitless. And parking solutions could be an entry point to the larger market of driverless vehicles.

But can these robotics firms really boost the French industry and economy? France’s industrial decline has proved particularly dramatic in the past decade. Robotics doesn’t seem to have changed anything, and the number of factories has dwindled drastically in France. The share of the industrial sector in the country’s added value dropped from 18 percent in 2000 to 12.5 percent only in 2011 and lags far behind that of Germany (26.2 percent) or Sweden (21.2 percent). In the 2000s, France’s export market share plummeted while Germany’s grew. The French industry has seen no other option but to crop its margins, which fell from 30 percent to 21 percent (meanwhile Germany’s margins went up).

There seems to be a stark contrast between the dynamism of France’s high-tech and robotics entrepreneurs and the catastrophic results of the French industry and its under-equipped factories. There are clearly too few robots in French factories; there are five times as many industrial robots in German factories as in France. German companies have invested an extra $12 billion each year while the French cut their investment by $5 billion. No integration has happened between French startups and the industrial giants that could make good use of their output. It’s as if the industry was worlds apart from the tech scene.

Former Minister of “Industrial Renewal” Arnaud Montebourg did try to create fruitful interactions between the world of innovation and the industry. In September of last year his 34 “industrial action plans” were designed by the government to boost France’s industrial sector by bolstering the country’s most competitive and innovative industries. Connected devices and robotics were identified as a source of future wealth for the nation and regularly promoted by the Ministry with special events called “Les objets de la nouvelle France industrielle“. Montebourg’s “New Industrial France” aimed to combine the actions of public actors and private companies to help the emergence of future French innovation.

Even if these plans had not been abandoned with the change in minister, one can doubt the efficacy such measures could have had. French ministers often only pay lip service to the idea of disruptive innovation, but in effect only protect the incumbents and business as usual.

The construction of bridges between France’s innovative startups and its fast-declining industry is not likely to come only from the French government but rather mostly from private initiatives and improved financing fluidity. Investment Fund Robolution Capital aims to do just that. Bruno Bonnell and his partners at Orkos Capital raised €80 million this year to invest in French (and European companies) and boost the industry in the process. “Robotics will emerge as an industry unto itself that will impact all sectors of the economy,” they say.

French economist Robin Rivaton in a widely discussed note titled “Relancer notre industrie par les robots” (how robots can help reboot the French industry) argues that factories reflect a country’s economic wealth and that mastering one’s production is a matter of economic strategy. He is convinced that industrial robots offer a path to re-industrializing France. Robots can help the French “insource” its industrial activities and restore its margins.

There’s no knowing whether France’s industrial decline can still be reversed. But promoting cool French robots can’t do any harm, can it?