But I thought we were recording our video selfies on Instagram and Snapchat now? A soon-to-launch mobile application called VideoSelfie, whose founders participated in the 500 Startups accelerator last year, has raised $1.2 million for its forthcoming mobile application that lets you edit your videos (of yourself, duh) in real-time. You can add filters, decorations and GIFs, hit record, then share, all at once.

The new app is a pivot from the company’s previous product called Unda, still live here on the App Store, which offered similar technology but was focused more on video messaging.

“Video messaging became a super saturated space and we knew we had to differentiate ourselves, so we started investing a lot of time developing our own technologies for motion tracking and face tracking to enable users fast ‘decoration’ of their video messages,” explains co-founder and CEO Oscar Noriega. “Now we want to focus on recording, decorating, editing and sharing, although we keep some basic messaging and community functions,” he says. 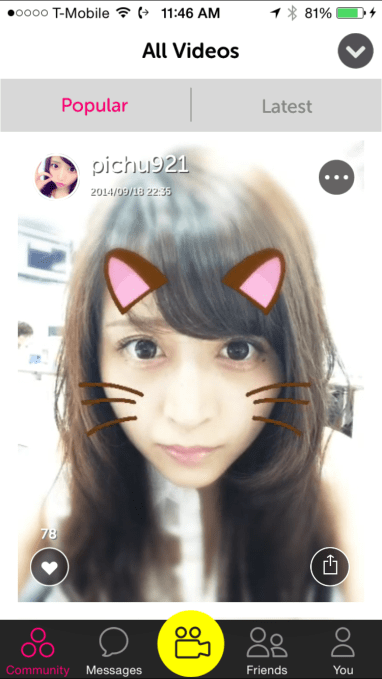 The company is also killing off its Unda Android application and will focus on VideoSelfie on iOS for now. (The app is still in Apple’s review queue at present.)

The main technology the company has built involves face tracking and motion tracking, which makes graphics added to videos interactive by detecting the movement of the camera and the movement of your head. Users tap the GIF button, pick a graphic then configure basic settings like enabling face tracking, making the graphic full size, or changing the animation speed. Then you pick a video filter and start recording, optionally adding music. The app ships with its own standard transparent GIFs, but it supports transparent PNGs if you want to add your own.

The end result are silly, short video clips where you can apply things like kitten whiskers and ears to your head, cover your face with an animated emoji, have some dancing cat GIFs hanging out next to you, and a lot more. You can then share these clips however you choose, including with the built-in community on the app. It’s definitely not serious stuff, but it is kind of fun. 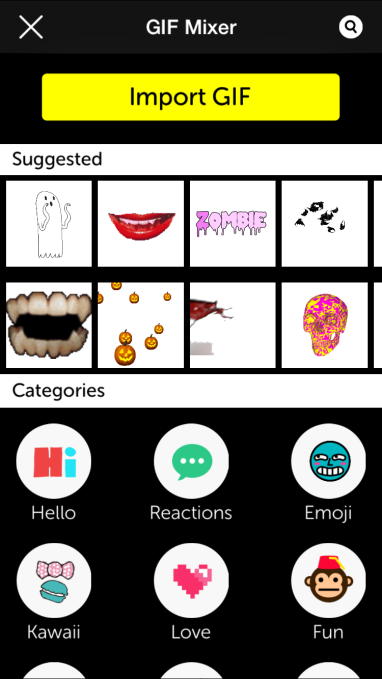 The 7-person company closed on its seed round of $900K from mainly Japanese investors, which makes sense as the team is based in Tokyo and the app has a Japanese vibe to it with GIF categories like Kawaii and Manga, for example. Investors included East Ventures, Klab Ventures, Cyberagent Ventures, and a follow on from the 500 Startups fund. Angel in the round included Takeo Matsuda (the ex-CFO of Groupon Japan) and Masi Oka (the hollywood actor from the TV show Heroes and Hawaii Five-0.) The round brings its total raise to date to $1.2 million.

As for why users would try out a dedicated video selfie app instead of just using popular apps for video they already have installed on their phones, Noriega explains: “Instagram and many other apps were never intended to be deeper video editing tools or real-time composition tools.”

The company says its value is in its real-time editing and mixing tools, face-tracking tech and real-time filters. It plans to generate revenue by way of selling additional filters and effects as in-app purchases, but one could imagine that it could also license its technology to bigger companies as another avenue for monetization.