Arist wants to turn your kitchen into a cafe by brewing almost any coffee drink. Arist grinds beans and pour shots at the right time, and its smartphone app can remember your favorite drink recipes, find new ones, and finetune things like water temperature and syrup quantity. Arist can even remember certain coffee cups with the aid of an NFC sticker.

The coffeemaker has already raised more than $200,000 on Kickstarter, surpassing its $120,000 goal, and is scheduled to ship in August 2015. Funds raised will be used to finalize and manufacture hardware, further develop Arist’s mobile apps and software cloud platform, and to apply for licensing and patents. 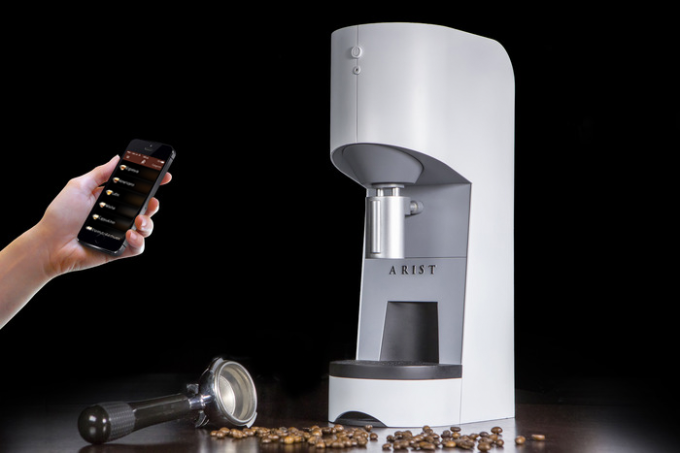 The Arist team tells TechCrunch it is confident that it will meet its shipment date goal because they have received support from the Hong Kong government and are currently being mentored by the government-run Hong Kong Science and Technology Park. Furthermore, Arist’s engineering team is located in Hong Kong, near suppliers and original equipment manufacturers.

The product’s name is derived from the middle letters of the word “barista” because it “brings the heart of a barista into a machine” by remembering your favorite drinks and making suggestions for new ones. Arist was created by a team of 20 coffee enthusiasts, led by CEO and project manager Benson Chiu, a former software engineer at Microsoft, and his brother, CFO and business development lead Nelson Chiu.

Other members of the team include Chris Yeung, who is a licensed Q grader (coffee quality graders certified by the Coffee Quality Institute), and is in charge of overseeing the quality of coffee produced by Arist, and “coffee community manager” Vincent Poon, a biotech engineer.

“When I was working at Microsoft, I hated the so-called coffee from the break room. I wanted to understand how coffee from a cafe could be so much better, so I started to learn how to make espresso on my own,” Benson Chiu explains.

“After a few lessons, I fell in LOVE. I realized that the brewing process can be quite complicated and very hard to repeat consistently. To improve the viewing process, I started out by hacking my own machine, but then I realized it needed to be done officially. So I gathered a group of people to brainstorm ideas.”

The team started developing Arist at the beginning of 2013 and as the concept began to come into fruition, the Chiu brothers decided to launch their own company, called Nbition Development Ltd.

Arist already has plenty competitors vying for the wallets of coffee lovers. Its closest rival is probably the Mr. Coffee series of programmable coffeemakers, as well as capsule coffee machines like the Nespresso line. Benson Chiu says Arist sets itself apart from capsule coffeemakers with its smartphone interface and by allowing brewers to use their choice of beans and brewing processes. Unlike many smart coffee machines, which only brew pour over style coffees, Arist can also make drinks like lattes and cappuccinos.

“Traditionally, there is a tradeoff between quality and convenience; the two just can’t seem to coexist in the same machine. Arist strives to solve this conundrum,” Chiu says.

For more information about Arist, visit its Kickstarter page.