Earlier this month, a ridiculous but clever app called Ethan began blowing up on the startup discovery site Product Hunt. The app is a simple creation built by iOS developer Ethan Gliechtenstein, who had previously launched photo and video app RubCam and a navigation app called Wheretext. The Ethan app, his latest, only does one thing: lets you text the app’s maker Ethan. Though originally designed as a way for Ethan’s friends to reach him, when others found the app, Ethan began responding to their messages and offering advice. And thus, a viral meme was born.

Now, Ethan says he’s working on an open source version of Ethan, which will allow others to build “Ethan” apps of their own. However, another developer has beaten Ethan to market with something similar – an open source project called “Ethanifier” that allows developers to build an app like Ethan in under five minutes.

This project, too, began to trend on Product Hunt, even catching the eye of Ethan himself, who remarked he was flattered by the attention, and added that he’ll have his own open source version of Ethan, its admin interface and the admin app out in the next few weeks.

In the meantime, though, those who want to mess around with the concept of the dead-simple personal messaging app can try out Ethanifier. The open source project, found here, was created by Michael Gozzo, who previously sold his startup Appifier, which turned WordPress sites into apps, to the Singapore-based company Infinite Monkeys. He says that he didn’t collaborate with Ethan on the app – despite its name – other than running his plans by him.

“When I saw Ethan launch his brilliantly simple take on the space I was floored – and loved the ridiculous opinions he shared with me – so we texted one another about the potential of doing Ethanifier, and he basically said ‘That’s awesome,'” says Gozzo. So during a flight to Vegas for an IT trade show, Gozzo wrote up an open source clone of the Ethan app using a product he manages called SupportKit.io. 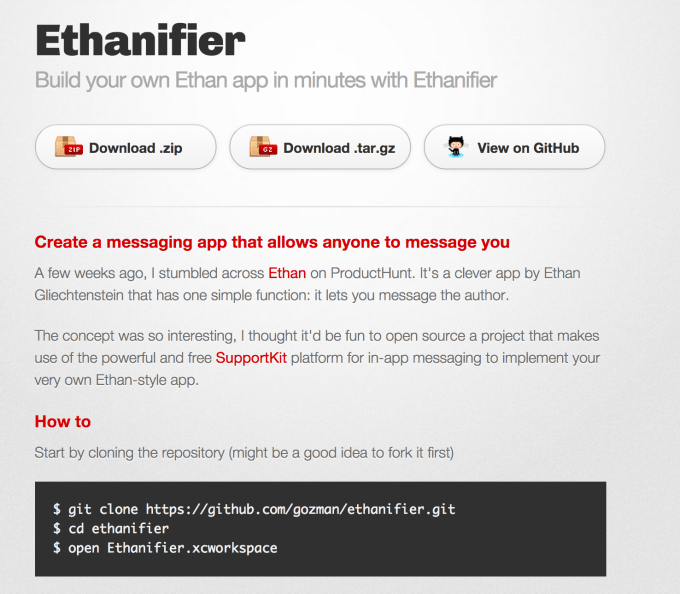 With Ethanifier-powered apps, app creators can answer messages from users directly from their inboxes, trigger automatic responses or even proactive messages based on things their users are doing. Already, Gozzo says he’s received a lot of feedback from those putting the app to use for a variety of purposes, ranging from using Ethanifier to build their own single-purpose apps or for giving their own apps a touch of personality.

As of Friday, just two days after launch, over 214 apps were being built off the code base, indicating early interest in the concept. Today, that number has climbed to 298.

Gozzo says he’s not running Ethanifier as a business. “I wasn’t really intending to compete with Ethan,” he says. “[I] just wanted to build a cool project.”

Ethan and now Ethanifier as well as the soon-to-launch Ethan open source version are yet further examples of this trend toward single-purpose, overly simple, push-button apps, like Yo or its clones. The question is whether these sorts of experiences will have any staying power or if they’re ultimately flash-in-pan memes — the “Flappy Bird” du jour, so to speak.

But with Ethanifier and Ethan’s open source version, the idea is less about getting people to build some buzzy viral app, but instead about letting anyone build their own personal creations. Explains Ethan’s founder, Gliechtenstein: “My idea from the beginning was to build a platform to let a thousand Ethans bloom. Otherwise, I wouldn’t have been as excited. Most people just see [the] Ethan app itself and are fascinated, but what’s even more fascinating is that potentially everyone can be an Ethan.”

Gliechtenstein says that Ethanifier is a cool way for people who can’t wait to try out the concept of an “Ethan” app before his open-source version launches. (Ha!) But because it’s built on top of the SupportKit.io API, it won’t work the same as the version Gliechtenstein has in the works, he says. His open-source app, admin app and admin web interface are launching in a few weeks, and there’s something else new coming out this week, too, Gliechtenstein teases. Stay tuned.