Boostable doesn’t have to sell its ads. Marketplaces sell them for it. Ticket, crowdfunding, and ecommerce marketplaces make money when their users sell things, so they’re incentivized to route traffic to the listings they host, which is exactly what Boostable’s easy-peasy ad-buying tool does for marketplace sellers do. So the marketplaces do the legwork of recommending Boostable’s ads to their sellers, the ads drive sales, and everyone makes money.

Most people say you should start a company with people you like. Selcuk Atli started Boostable with his arch nemesis. 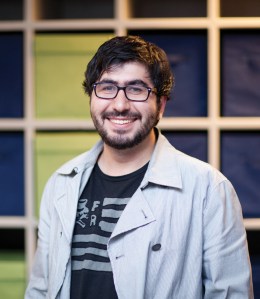 Originally from Istanbul, Atli came to New York on a Fulbright Scholarship and eventually ended up in California where he raised $4 million for an ecommerce ad company called Social Wire. One of its biggest competitors was Social Amp, founded by Alex Chang. The bitter rivalry turned into a fruitful partnership years later when the two co-founded Boostable, raised $500,000 from SV Angel, and went through YC. Keep you enemies closer, right?

Marketplaces make a lot of money, but on a small margin. Etsy makes just 3.5% per sale. That means they know who potential repeat customers are, but they don’t have much to spend on ads to reach them. But the sellers who list on them can earn serious profits. The problem is they aren’t savvy enough to reinvest those profits in effective ads, and these sellers are so scattered that they’re tough for ad tool developers to track down.

Boostable has solved the puzzle, though. Marketplaces give it customer targeting data and promote the tool to their sellers, who simply set a budget and paste in the URL of their ecommerce store, room rental, crowd funding project, or event. Boostable auto-generates creative for their listing and runs optimized ad campaigns on Facebook targeting previous purchasers on that marketplace or other potential customers. Ideally, these drive sales ROI-positive sales for the sellers, which earn fees for the marketplace, and Boostable takes a cut. Boostable now has about 10 marketplaces on board, including “unique” ecommerce portal OpenSky.

For example, if a jeweler wanted more sales for a necklace they’re selling on OpenSky, they’d just punch their OpenSky URL into Boostable, which would buy it ads and earn the jeweler, marketplace, and itself money as long as the ads are effective enough to get enough people buying necklaces to offset the ad budget.

The scheme isn’t new, at least offline. It’s called cooperative advertising. A product maker like GoPro will help a retailer like Best Buy sell more of its devices so they both earn money. Boostable wants to bring the whole thing online. Atli tells me “It’s a $150 billion business and 98% of it is offline.” 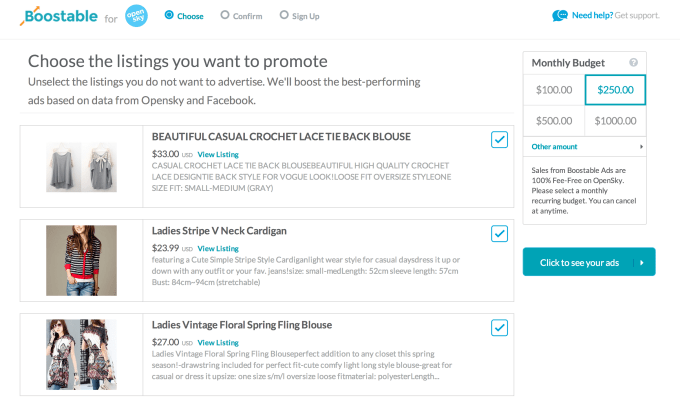 Sellers can paste in one of their listings, like their ecommerce store on OpenSky, and start running auto-generated ads through Boostable

So why wouldn’t the marketplaces just build these ad tools so they don’t have to share a cut with Boostable? Atli says “it’s a whole other competency. They already outsource all of their advertising tools.” Plus, Boostable has an advantage as many sellers operate on multiple marketplaces simultaneously, so it could help them get more sales across all their storefronts, which a marketplace itself couldn’t do.

One problem is that many marketplaces are designed to promote comparison shopping and discovery. If a seller buys an ad pointing to their listing, they don’t want the visitor to instantly click to a competing seller on the marketplace and buy there instead. That’s why Boostable is working with marketplaces to either strip out some of their comparison shopping promos from the seller listing landing pages for the ads, or include coupon codes in the ads that incentivize customers to buy from whomever paid for the ad. Marketplaces are weary to change their product, though.

Good thing Boostable has a big carrot to dangle. If it can get sellers from competing marketplaces to be loyal to its ad tool, it can promise to get them aboard a new marketplace if they play ball.

Commerce used to be strictly professional. But now, almost everyone is selling something on the side — a free room in their house, a handicraft, tickets to an event they’re throwing, or contribution spots for their Kickstarter. Boostable could be the company that turns a new generation of merchants into lucrative new advertisers.