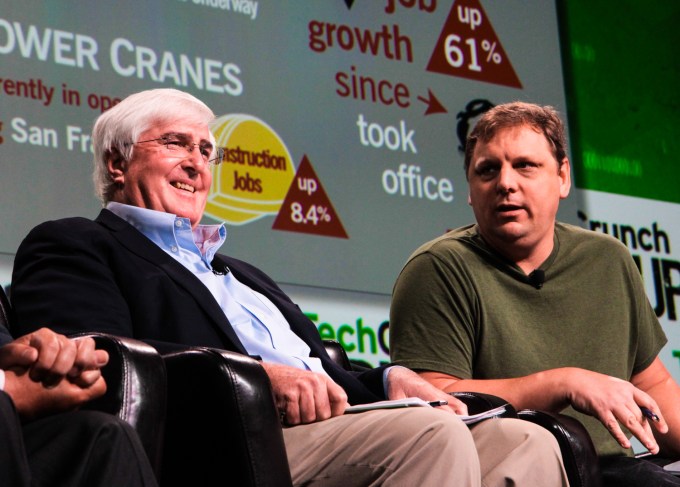 The first panel of today’s Startup School event at the Flint Center for the Performance Arts had Paul Graham interviewing SV Angel’s Ron Conway. Given the audience — which based on some chatting before the event, consisted of many Stanford students and high schoolers in the South Bay Area — Graham’s line of question primarily had to do with the traits and skills needed to be a successful founder.

Conway began by stating that a good entrepreneur has to “have a huge work ethic, be ambitious, aggressive, tough.” He also said that being an entrepreneur is a vocation: “You can’t learn to be ambitious and driven.”

But then he took a turn for the serious, warning the enthusiastic crowd that “you have to be willing to work 24/7.” He then went a step further, solemnly claiming, “Dating someone or married: warn them that they’re not first in line, that you have this vocation, that your duty is to your company. It has to be that fanatical.” Before completely scaring everyone in the room off from their dreams, he pulled back to a more jovial tone: “Once you’re willing to make that commitment, you have that work ethic checked off.” The audience half-laughed.

Breaking from the subject, Graham asked what advice Conway had for young founders. “The first thing you’ve got to do, your idea has to be infectious enough to find a co-founder,” Conway began. He then spent some time talking about SV Angel’s philosophy that people matter more than ideas. “If one founder is always stopping or interrupting their partner, that sounds a warning bell. They’re probably not going to get along forever. They’re probably already bickering about who should be CEO, and it doesn’t even matter at that point.”

When Graham asked what kind of people SV Angel is looking to invest in, Conway said that background isn’t the motivating factor: it’s the circumstances that led to the startup’s creation. “The question I always ask is: What inspired you to start this company? Whether or not they’re in college doesn’t really matter for me because there are founders that didn’t go to college, there are some who had some college, and there are people like Larry and Sergey who went all the way through. When that compelling idea comes into your head, that “aha” moment, that if you’re not in school, in school, you stop what you’re doing and start on that idea.And usually that idea is based on some personal experience. All the biggest companies are based on a founder who had a need, hacked it together, and said, “hey, other people might want this.”

Rounding out the interview, Graham asked what mistakes Conway frequently sees from young founders. The biggest issue he pointed out was not recognizing and adapting to a product not finding a market. “It would be lying to yourself after you’ve prototyped the product, it’s hit the marketplace, it’s not getting traction, is not admitting that it’s not working, to not take a step back and ask what isn’t working. Your product is getting traction or it’s not.” He also said that younger founders are gun-shy on laying off workers when it’s time to pivot: “It’s counter-intuitive, but when you lay off dead wood, morale explodes.”