Marketing startup BrightFunnel is announcing that it has raised $2.5 million in seed funding.

I last wrote about the company in January, after it raised an “advisory round” totaling what co-founder and CEO Nadim Hossain said was just under $1 million.

At the time, Hossain told me that his goal was to build “the Google self-driving car for marketers,” though he acknowledged he wasn’t quite there yet. The current BrightFunnel product may not completely automate marketing campaigns, but it does offer data about which campaigns and channels are performing well, and it points marketers to actions that will likely lead to increased revenue. It integrates with existing marketing automation products like Marketo, Pardot, Act-On Software and Hubspot.

In the past 10 months, Hossain said BrightFunnel’s vision has been “doubly and triply validated,” with the team doubling in size and the customer base tripling. (Those customers include Nimble Storage, HootSuite, and ServiceMax.) He argued that one thing that’s become clear as BrightFunnel brings on more customers is the importance of speed: “What marketers need is not to wait until a week later to receive data that’s verified to four significant figures. They need data now. They need insights now.”

And while there are plenty of basic analytics products for marketers, Hossain positioned BrightFunnel as the one that can solve “the last-mile problems that marketers are facing.” For example, businesses need detailed attribution data that covers the “10, 20, 30 touches” where someone interacted with a business’ marketing before they became a paying customer.

“[Business-to-business] marketing is like a hamburger — all the good stuff happens in the middle,” Hossain said. 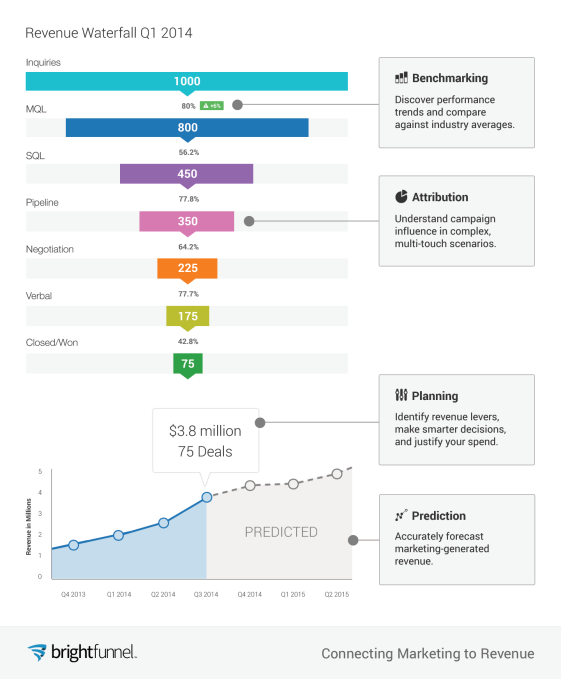