Google’s Chromecast is the most popular “connected device” – or so infers a new report from app analytics firm App Annie, which analyzed the top apps associated with connected devices across both iTunes and Google Play in the U.S. Google’s Chromecast app was in spot #1, in terms of downloads, followed by Fitbit, DirectTV, HP ePrint, Kodak Kiosk Connect, Square Register, GoPro, AT&T U-verse, DISH Anywhere, and HP All In One Printer Remote.

Gartner says that there will be 26 billion connected devices globally by 2020 – an astounding figure – but one that makes more sense when you start to think about the connected devices you already use in your own home – DVRs, game consoles, smartwatches, wireless printers, and more.

That the Chromecast came out on top in this list is impressive, though – especially in a market which still seems to be drawn toward traditional TV and DVRs and yes, even home printers. It also signals a shift in the way consumers are viewing content today – accessing video from the internet and online services via mobile devices and then sending that over to the big screen. Our mobile phones are becoming the new remote controls.

Chromecast also likely beat out its competitors in this niche because of its low price point – at $35 the device was designed to pick up a critical mass of users quickly. 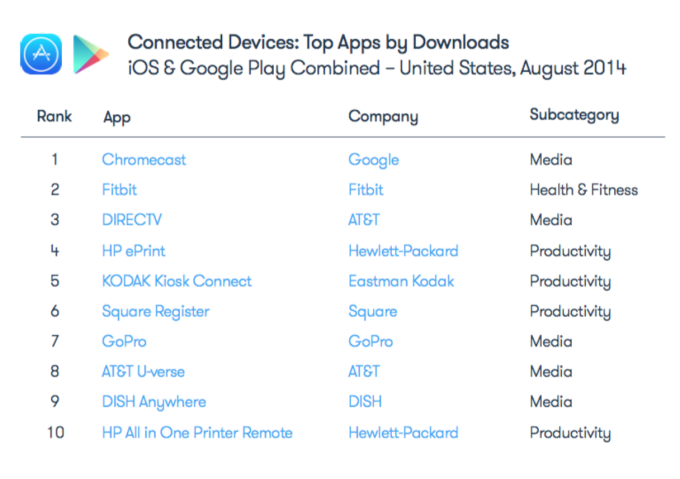 App Annie says that in its analysis of connected device apps, 27 of the 30 it studied between August 2013 and August 2014 grew roughly 50% in aggregate downloads on iOS and Google Play combined, in the U.S. To put that number in better perspective: all apps outside games grew just 2% during the same time frame.

Of all the subcategories within the connected device apps group, the largest was “Media,” which accounted for roughly 40% of downloads. All five of the Media apps also ranked in the top 10 for the overall connected devices category. 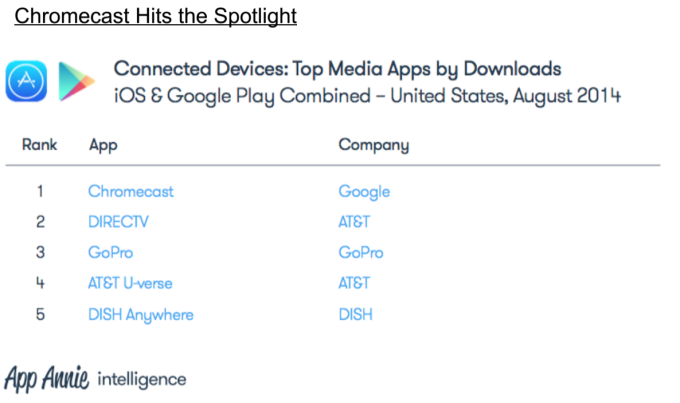 Productivity was the second largest subcategory, with about 30% of downloads and four apps in the top 10.

Health & Fitness came in third, followed by Car, Home and Watch. App Annie pointed out that, though connected cars, homes and smartwatches are currently receiving a lot of buzz, the numbers related to real-world app downloads in these groups are still low.

Combined, these much-discussed subcategories only accounted for 15% of downloads. (This should be an interesting metric to re-visit after Apple’s Watch goes on sale.)

In the Health & Fitness subcategory, though Fitbit was number one – as the top 10 list shows – it’s followed by Jawbone’s Up, Garmin Connect, Nike+ Fuelband then the Misfit Shine. These five apps collectively grew over 2.3x in monthly downloads since August 2013 – a bigger increase than the top apps in other categories, indicating that the market, though small, is expanding.

The Printers and Card Readers subcategory (or Productivity, for simplicity’s sake) was led by HP ePrint, then followed by Kodak Kiosk Connect, Square Register, HP All in One Printer Remote and PayPal Here.

Something interesting to note here is that Square’s app is topping that of PayPal – at least in terms of downloads. Another tidbit – though HP ePrint seems like it’s a holdover from another era (printing!), the app actually is very much about cloud services – it lets users printed from cloud applications like Evernote, OneDrive and Dropbox, for example. 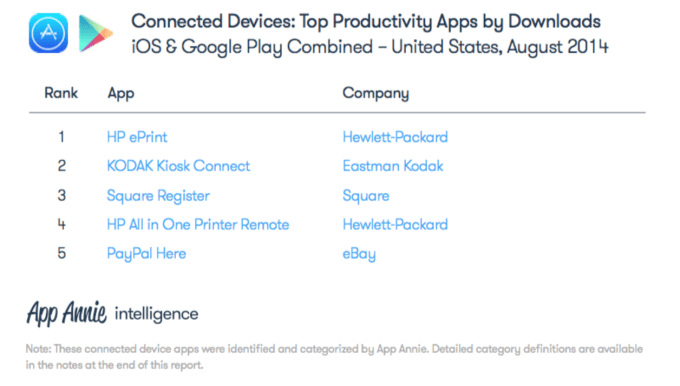 App Annie didn’t delve into the rankings for connected cars and home apps, but mentioned the Cruise RP-1, proprietary in-car systems from Toyota and Nissan, Apple’s CarPlay, Google’s Android Auto, ADT Pulse, Honeywell Lyric, and others as helping to shape this section of the market.

More detail is available in the full report here.