TechCrunch Disrupt Europe is on 18-21st October, in London. Saturday and Sunday will feature TechCrunch Disrupt Hackathon, followed by two days of full-blown conference, with interviews and panels with Europe’s best entrepreneurs and VCs. Get tickets while they are still at the Early bird price.

With so much of the financial world leaving the cosseted environments of the enterprise and entering the Cloud, disruption in financial technology is happening all over. The foreign exchange market, company information and even fundraising platforms are all part of this enormous change.

So it’s exciting that we will see these areas represented on our FinTech panel at TechCrunch Disrupt Europe. 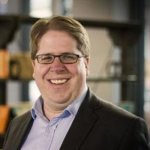 Jeff Lynn is CEO and co-founder of Seedrs, one of the main pan-European equity crowdfunding platforms, and the first in the world to receive regulatory approval. Seedrs lets investors invest as much or as little as they like in startups they choose, and it lets startups raise capital from friends, family, angels, institutions and the crowds, all through a simple, online process. Seedrs is currently funding over £1 million per month into startups across Europe.

In addition to running Seedrs, Jeff serves as founding Chairman of The Coalition for a Digital Economy (Coadec), a non-profit advocacy group for digital startups and SMEs, and as a non-executive director of Companies House, the UK government agency responsible for company registration, filings and data.

In the two years since it launched, the business has transferred over £1bn worth of customer money and has attracted $33m from investors such as Richard Branson, Peter Thiel and Max Levchin, co-founders of PayPal.

Prior to starting TransferWise, Taavet was Skype’s director of strategy until 2008, starting as the firm’s first-ever employee. He also helps the startup community as an advisor and angel investor. His investments include Tweetdeck, Mendeley, OMGPOP, Betaworks, Farmeron and Teleportd among others.

At TransferWise, Taavet looks after marketing and product development.

Damian Kimmelman is the founder and CEO of DueDil, the London-based fintech business whose vision is to organise the world’s private company information. In March 2014, DueDil completed a $17m Series B financing round, supported by Oak Investment Partners, Notion Capital and Passion Capital. Prior to launching DueDil, Damian set up two other businesses: a peer-to-peer Chinese gaming platform and a digital agency whose clients included the BBC, Virgin and General Motors.

As well as these many great speakers, of course TechCrunch Disrupt Europe will also bring the Startup Battlefield and Startup Alley to London.

Startup Battlefield competitors pitch their companies live and on stage, competing for a prize of £30,000 and the Disrupt Cup. Previous Battlefield competitions have launched companies such as Dropbox, Mint.com, Yammer and Fitbit. You may have heard of them. Startup Alley features about 200 invited startups.

Find all the latest information on the Disrupt Europe website.