Two serial entrepreneurs have launched Plastc, a competitor to the digital smart card Coin, as the market for new payment technologies gets increasingly crowded.

The two companies are vying for market share just as the Apple Pay release casts a huge shadow over the entire payments industry. But can one consumer technology company really change user behavior so drastically and so completely on the back of a single release?

Both Plastc and Coin are betting that Apple can’t.

Like Coin, Plastc’s card consolidates credit and debit cards, loyalty and gift cards, access cards and coupons on a single device. Working in tandem with a Plastc Wallet app for iPhone and Android, the device can store more cards than Coin, according to the company.

The card is tricked out with an E-Ink touchscreen, which shows name, credit card, barcodes and other information. With a swipe and tap users can change their card from a credit or debit card to a rewards card, thanks to the card’s rewriteable magnetic strip. The card also has a rewriteable NFC/RFID technology that lets the card mimic any RFID access cards.

For consumers, there’s a $155 charge to purchase the card, but Plastc has managed to pack a lot of really amazing features in its card-shaped box. 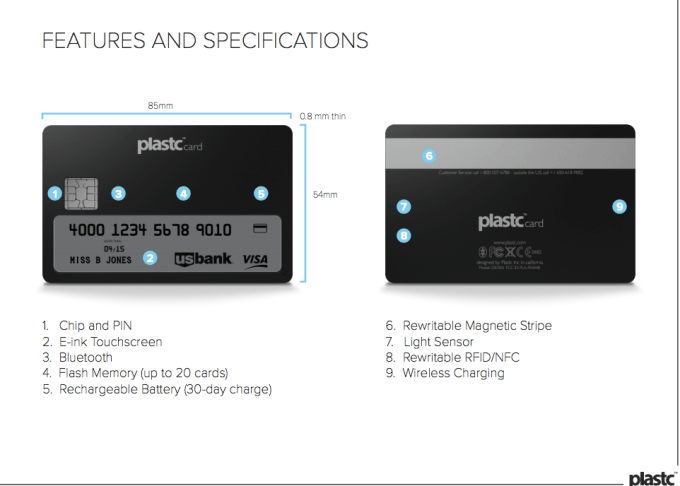 For the Palo Alto, Calif.-based Plastc, the digital wallet and mobile payment revolution will hopefully drive adoption for its own technology, which co-founders Ryan Marquis and Mark Stubbs see as a bridge between the old and the new.

“There was no way a consumer was going to go from a physical wallet to a digital wallet without some sort of bridge technology,” says Marquis. “The fact is that we’re giving someone the technology that they’re used to using. It will work at gas pumps, ATMs and will hold up to twenty cards on it.”

“The card will work seamlessly with existing card infrastructure. There won’t be more expense for a vendor, because it’s the same technology they’re using today,” says Marquis. 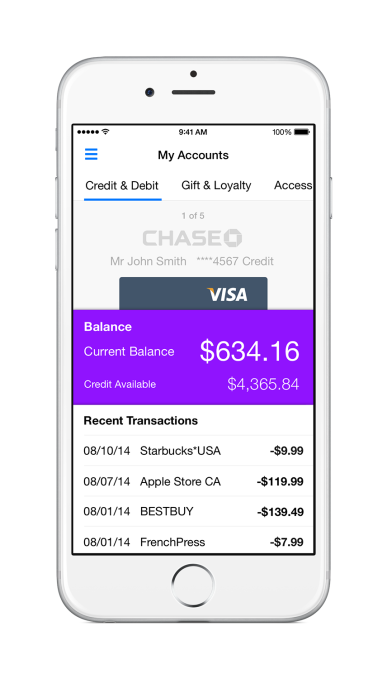 Plastc’s also been built to accommodate future payment technologies like chip and PIN technology, so that the card will work globally after an update in 2015.

Additional security technologies include a photo ID and signature feature so that retailers can have additional forms of identification. Each card has a 30-day battery life and wireless charging features thanks to a charging mat that ships with the card. A light sensor ensures that the card is only activated when it’s out of a user’s wallet as another energy-saving feature.

Meanwhile, the company’s app includes a secure pin, facial authentication to verify a user’s identity with biometrics to prevent unauthorized access to the wallet app. It also includes a nifty proximity alert feature to let a user know when they’re more than 100 feet away from their Plastc Card (although that could be a hassle in a big club).

Because the wallet integrates directly with banks there’s a feature that lets a user see banking transactions and balance histories from cards in one space.

All of these features seem to put Plastc head and shoulders above its competition and presents it as a viable bridge between card-based and wholly digital technologies. But can it be more than a stop-gap? With NFC technology still rolling out, that may be enough, says Marquis.