Bitcoin, the best-known cryptocurrency, recently slipped under the $400 mark, a former price floor that some viewed as a bulwark against further price pressure.

For historical context, here’s the chart, with the current price correlated, roughly, to the last time that bitcoin was this cheap. Or put, another way, bitcoin has burned off nearly all of its former heights: 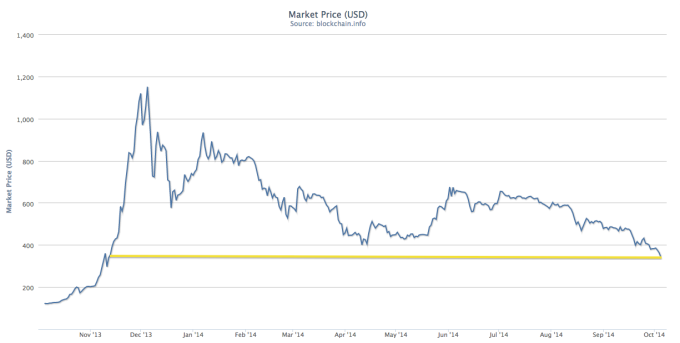 What is driving bitcoin’s price down? Some blend of profit taking, negative price pressure created by new ecommerce adoption, less market interest, I’d hazard. A better question might be what could cause the current bitcoin slide to reverse course.

It isn’t just the folks who held onto their bitcoin that are hurting, however. The revenue of bitcoin miners, who have invested heavily around the world to build infrastructure that powers the bitcoin network, have seen their incomes greatly decline.

According to Blockchain.info, miner revenue is down from a high of more than $5 million per day, to under $1.5 million today. And that on the back of the fact that ‘mining’ itself is becoming more difficult.

So call it a bitcoin trough. Good news? There appears to be a recent trend towards increasing transaction volume across bitcoin, which could imply growing global interest in the cryptocurrency. We’ll see.