A personalized news reading app, Pipes, is now offering summaries of news stories to save mobile readers time while trying to catch up on-the-go. This is a big shift for the app, which launched earlier this year to offer a more mainstream-friendly way of consuming news and other topical information from a variety of sources, without having to understand the technicalities of using RSS or needing to subscribe to individual websites. Pipes works instead by helping you to find and follow your interests, and then turns those selections into feeds of popular articles on the subject matter at hand, whether that’s an ongoing news event or even a company name, like “Apple.”

When Pipes first debuted, the company was not focused on offering bite-sized news summaries – like those found in an app like Circa, for example –  and only pointed readers to articles on publishers’ websites. What made it interesting, however, beyond its personalization capabilities, is that it also aggregates related tweets referencing the topic you’re reading about, as well as the item’s Wikipedia page, if that exists.

You can then opt to receive customized push notifications about individual topics (your “pipes”) and/or the day’s top stories, selecting to receive them either once or twice per day. And if you’re not sure what to follow, you can browse the top stories or just shake your phone to view trending topics. 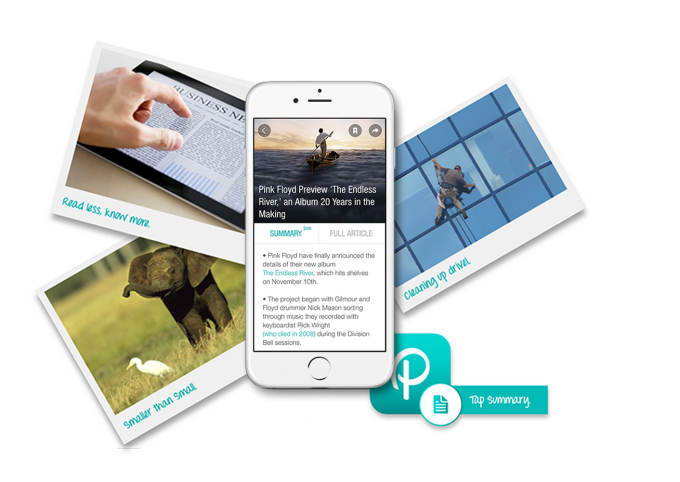 With the updated app out now, Pipes introduces a story summary feature. But unlike some competitors, which use editing teams to help craft their summaries, Pipes’ summaries are built using natural language processing algorithms that only summarize content when it needs to. In other words, not all stories found on Pipes are summarized – that option will only be turned on for those where a shortened, bulleted version is warranted.

Pipes’ algorithms are smart enough to know not to try to summarize a video or image post, explains co-founder Vinay Anand, and it doesn’t summarize an article under 200 words.

Under the hood, a new parser the team calls “Toast” is what’s making these summaries possible. Where before, Pipes had leaned on Readability and Google (until it got too big, and got the boot), Pipes is now using its own unique IP which removes the clutter from a story and returns the relevant keywords. “It gives us the top 20 keywords associated with the article, and it’s really smart,” Anand says. “If [an article] says ‘Zuckerberg,’ for example, and ‘Mark’ is only mentioned once, it still ends up showing ‘Mark.'”

Toast also helps with the article summaries, changing the text and sentence structure as needed to make the point more briefly.

Since its launch, the app has climbed to 70,000 users from 6,500+ in June, has crawled over 3 million stories, and created 440,000 individual “pipes.” The team also released an Android version, which has been updated to include the new features, too, but lags behind on a few others – like the support for relevant tweets.

Anand says that, to date, most of Pipes’ downloads have been on iOS which is why it’s been more of the focus to date.

Going forward, the company is working to improve the “shake to view trending pipes” feature, and beefing up its archives. (Today, servers store data for 12 days; Anand wants to stretch that to 30.)

Pipes plays in the same general space as competing products like TechCrunch Disrupt participant Notivo, Flipboard or Bloglovin for casual news readers, RSS feed-reading utilities like Feedly or Reeder, as well as new summary apps like Circa and Yahoo News Digest.

But where Yahoo’s app only (annoyingly) pings me twice a day to let it know it has new stories, Pipes’ personalized alerts offer more motivation to dive in and read.

Pipes is working to close on a $1 million round of seed funding, expected in two months’ time.

The app is available here on iTunes and here on Google Play.