With much of the web moving inside native mobile apps, Facebook needed a way to get content from inside them into its walled garden. So after previewing it at f8 in April, Facebook today officially launched the mobile Like button and opened it to all iOS and Android developers to give their users a way to instantly share content to the News Feed from within apps.

The mobile Like button can be used to Like an app’s Facebook Page, an Open Graph object in an app, or share a piece of content or achievement like beating a level in a game. Facebook says its Like and Share buttons are viewed across 10 million websites per day, but mobile web technology hasn’t been able to keep up with the power and design finesse of native mobile apps. Now Facebook will be able to dip its ladle into the mobile experiences of third-party developers, and bring back stories to keep its feed interesting and drive eyeballs to its ads.

Here’s how the mobile Like button looks on iOS and Android:

When tapped, Facebook fast-app switches a user from their current app to the Facebook app where they’re shown a confirmation dialog. Once they confirm or deny the Like, theyre popped back into the app from whence they came. 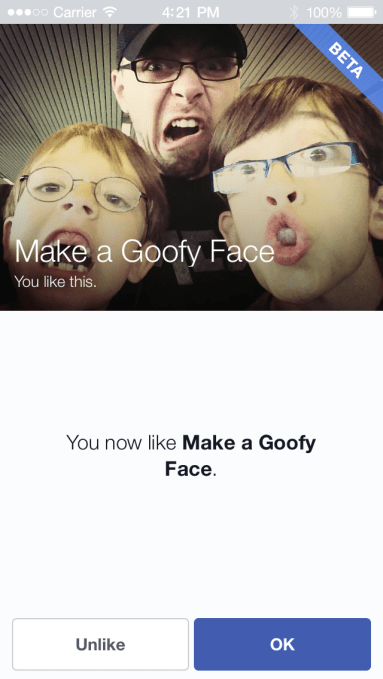 Here’s how it could be used in a few games. The first shows Liking a piece of in-game content, the second demonstrates Liking a developer’s Page from within an app, and the third is a look at Liking an Open Graph object in a game.

Facebook’s web Like button not only let it siphon content from the rest of the Internet, it made Facebook a ubiquitous brand. If you hadn’t signed up for the social network, you’d be constantly reminded of its world-wide presence because every news or brand website you visited would be littered with the buttons. By creating a value exchange where Facebook delivered referral traffic to developers and publishers in exchange for the presence of its buttons and pulling in content to fill its feed, the world was incentivized to stick Facebook’s logo all over itself.