Is your inbox cluttered with too many messages from clubs in your area notifying for all the shows coming up, but not the RIGHT shows coming up? Can you never figure out when the hell that band that plays that song that you like on Spotify will actually be in Baton Rouge, Boise, or Dubuque? Or get your friends to come out with you to just hang?

Well Rowl has raised $4 million in fresh financing for its app that aims to make your event-going life that much easier.

“With the algorithms and the clutter that exist on Facebook and Twitter, even if [artists] have millions of fans, the only way they can reach them is to geo-target and spend money,” says Rowl president Bill Glaser. “Using our platform they can reach our target in the exact area where their event is.” 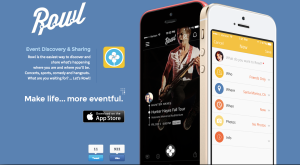 And Rowl isn’t just for musicians, anyone with an audience they’d like to reach, or anyone who wants to plan an event with friends can Rowl, Glaser says.

It’s like a more organizationally minded variation services like Bandsintown, and investors like former Logitech chief executive Jerry Quindlen, serial investor, entrepreneur and all about new media maven Gary Vaynerchuk, and Martha Rivers Ingram, have signed on to back Glaser’s sound and vision (apologies David Bowie).

“We’re giving [artists] a way to reach their audience in a hyper-local way,” says Glaser. The company has already done deals with some “influencers” so that the company can offer incentives to fans.

Before launching the business Glaser made the rounds in Los Angeles and around the country meeting with record labels, with ticketing giants like LiveNation. “The problem with a lot of emails you sign up for when you follow a band that you’re interested in is that whoever is managing the email, can send you information from the band you’re interested in and all these other bands too,” Glaser says. “Then you’re getting inundated with things that you’re not interested in.”

Rowl’s already got partnerships with LiveNation, Ticketmaster, and the company is adding Wantickets to handle electronic dance music. As for musicians, Rowl’s enlisted Hunter Hayes, a younger country music phenom, who one of my musically inclined co-workers calls earnest, but not to the point of cheesiness.