Yes, my friends, there is an app more annoying than Yo. If having your phone randomly shout “Yo!” at you (or “Hodor!,” if you preferred the spin-offs) drove you batty, wait until you get ahold of this: Noice, an app that lets you communicate using only emoji and sounds. Really!

In fact, there’s a distinct probability that kids will like this thing, which was product-tested with tweens and teens. After all, younger users reportedly drove Flappy Bird’s initial traction, its now-reclusive creator Dong Nguyen once told us – he saw his app was being passed around mostly school kids, he said.

While you may remember jelly bracelets or pogs among the viral toy trends of your own childhood, kids these days collect goofy apps. Noice fits the bill. Idiocracy rules, I tell you.

The app is pretty basic to use. Sign up with a username. Add friends by username. Send them emoji. Send them lots of annoying emoji, until they’re forced to put their phone on silent mode or just delete the app to escape your sound barrage.

Senders hear the emoji they’re choosing to share after selecting it, and then recipients get a push notification on their phone with the emoji you shared and the accompanying sound. 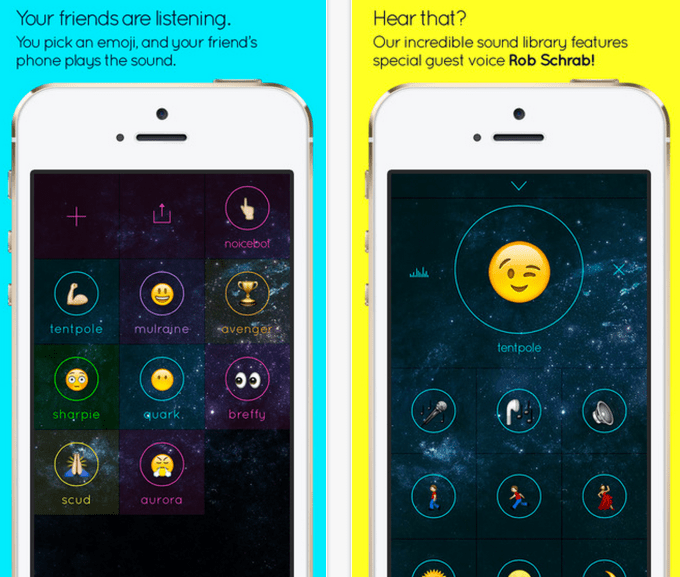 And, oh, the sounds. I mean, how did you really survive this long without being able to send fart noises to your friends’ phones? I have no idea. And how genius is it to have a business model where that’s the sound you actually have to pay to acquire?

“It will change communication as we know it. It transcends language. Culture. Other stuff,” says Noice co-creator Brad Mahler, who is clearly in on the joke.

Mahler, a co-founder at Studio Tentpole, built Noice as a side project with co-founder Mark Tholking. The two create apps as their day job, having previously published a product scanner for adding thing to Pinterest called LoveList, an iPad text editor called Slidewriter, and a location-tracking utility OMW (On my way), which is the studio’s core product.

Noice was just meant to be fun, says Mahler, but he also sees it as a way to experiment with apps you can use without taking the phone out of your pocket – that is, apps that are mainly about sharing sounds.

Noice ships with 150 emoji-sound combinations, which include the sounds associated with every version of the smiley/frowny face emoji, and most of the other regularly used emoji like the hearts, the hands clapping, people dancing, all the animals, a lightning bolt, rocket ships and more. The team has also roped in Emmy winner Rob Schrab (credits: The Sarah Silverman Program, Community, Scud: The Disposable Assassin) to provide a bunch of exclusive sounds for the app. (And no, you can’t make your own sounds, if you’re wondering. <Frowny face goes here>.)

Mahler heard Schrab doing sound effects on the Harmontown podcast and blindly reached out, he says. (Dan Harmon, Community co-creator, and Schrab have worked together, and won an Emmy for their efforts with the 61st Primetime Emmy Awards.)

“We can’t pay, but would you be interested?,” Noice’s founders had asked Schrab. “And he said yes,” Mahler explains. They only requested a few sound effects, but Schrab sent back a 26-minute long tape that the founders then turned into 70 different sounds – some of which they couldn’t, ahem, use.

Asked what motivated him to get involved, “I want to use [the app] to piss off Dan Harmon,” Schrab told them.

Noice is iOS-only for now, and free on the App Store.