Pricing tracking and alerts service Nifti is testing the waters with a new application called Cinch (no, not Klout’s advice-giving app also called Cinch, but very close.) In fact, Nifti’s new app is practically a variation on Klout’s earlier arrival, as Klout’s Cinch is about asking for recommendations and Nifti’s Cinch is about asking for opinions. That is, it’s meant to be a quick way to poll your friends and get their feedback by posting photos and asking friends to choose which is best.

The company envisions it being used for a range of quick questions, like which selfie looks better, where to have dinner, what to wear, and more.

Explains Nifti co-founder Nathan Sharp, the idea to spin out the new app actually came from observations of how people were using the company’s alerts service. But the move was mainly prompted by a general slowing-down in the broader “price tracking” space itself, which had seen rivals like Hukkster going bankrupt, and Decide.com having an un-bragworthy exit to eBay.

Meanwhile, though Nifti was performing well, Sharp admits growth was “promising, but linear.”

Nifti’s direct competitor Wantworthy was going through struggles of its own, too. Following Nifti’s raise of $1.2 million in additional seed funding in December, the company brought on the CTO and the Creative Director of Wantworthy, Ryan Fitzgerald and Julian Zarate, to rethink Nifti’s approach to the price-tracking space.

After examining Nifti’s analytics and talking with its users, the team found that much of Nifti’s organic growth occurred when users received a price alert then sent it to friends to get their opinions. 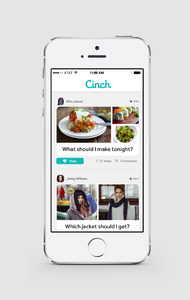 “The more we talked to people, the more we realized that this wasn’t social sharing – it was private polling,” says Sharp. “Neither Nifti, nor other messaging apps, were doing a great job of allowing people to quickly gather opinions around a photo-based decision. So we set out to build a visual polling service to drive Nifti’s organic growth to the next level.”

Initially, the polling feature was tested within Nifti’s main application, leading some to believe the company had entirely pivoted away from price tracking. But Sharp says that’s not entirely true – Nifti’s move to social polling was a test. Shortly afterwards, the team decided to spin polling out into a new app called Cinch.

Today, Nifti.com remains online, but the company’s mobile presence is represented by Cinch.

The new app is simple to use – you just snap a few photos and send them to anyone in your phone’s contacts. Recipients can then vote in just a tap, and they don’t even need to download the app to do so. Friends can’t see others’ votes until they vote themselves, allowing you to receive unbiased feedback.

In addition to personal or casual use, Sharp notes that Cinch could be handy for those in creative professions, too. “It’s also an ideal app for professionals in visual-oriented fields like designers and interior decorators that are in constant need of feedback,” he says.

Nifti’s $1.2 million round of funding included Otto Capital, Dan Edelman (recently retired CEO of Macy’s West), and Timothy Kasbe (COO Gloria Jeans; former CIO of Sears). With this additional investment, the 6-person team at Nifti now has more than a year before it will need to pursue its Series A.

However, even a successful polling app can’t necessarily find enough sustainable growth to make it on its own either, especially after VC investment – as popular social polling app Polar recently found. (The company exited to Google this month in what appears to be largely a talent acquisition.)

The new Cinch app is live on the iTunes App Store now, as a free download.