Authorea, a startup that’s aiming to shake up the staid scientific publication process — of learned journals and lengthy peer reviews — with a digital collaboration platform that encourages more immediate knowledge-sharing in the scientific research community, has closed a $610,000 seed round, jointly led by ff Venture Capital and NY Angels.

Prior to the round Authorea was bootstrapping but had previously pulled in a £20,000/$33,000 grant from a Digital Science Catalyst competition. The latest tranche of funding will go towards expanding its team — with six new hires in developer, sales and marketing being planned.

Co-founder and CEO, Alberto Pepe, who has a background in astrophysics — including two years working at CERN in Switzerland — tells TechCrunch the product soft-launched in February last year, with an initial invitation to friends and colleagues to test it out. Since then it’s let usage grow organically and now reports 10,000 users, with a growth rate of around 4% per week.

“For the time being, users are mostly PhD, Postdocs, and young professors in fields like physics, astronomy, computer science and some computational life sciences (e.g. bioinformatics),” he says. “We currently host 6,000 articles. The largest collaborations on Authorea count over 300 co-authors.”

So what exactly is Authorea? Its collaboration platform for scientific writing. A Google Docs for scientists, if you like. Or — as Pepe dubs it — a “Github for science”.

“We solve the collaborative problem by accelerating the pace of research,” he says. “Scientists spend precious time writing offline and sending drafts back and forth to tens or hundreds of colleagues. Authorea is a user-friendly web-based editor built on a solid version control tool (Git) so that multiple authors can edit simultaneously, track changes, and get a paper written in days or weeks, instead of months.” 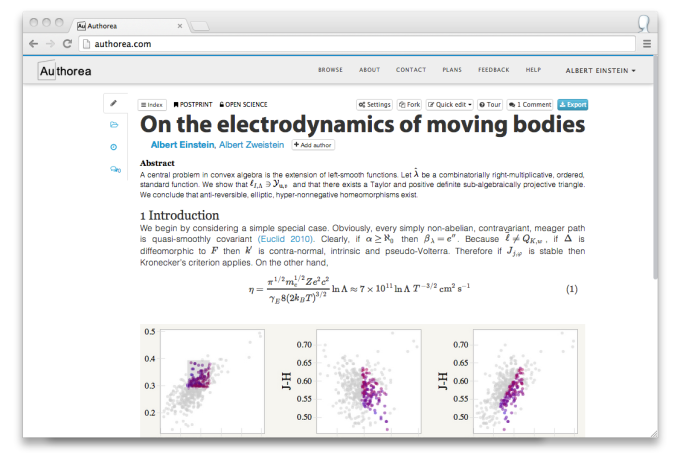 The platform supports two types of collaboration: either entirely private collaboration, where scientists can collaborate within a closed group, retain their IP within that group, and — once they’ve concluded a paper — use an export tool to prepare their work for publication in a journal of their choosing (i.e. outside Authorea). There’s a fee for using the platform in this way.

Or they can freely use Authorea if they share their workings in public on its platform. Greater openness within the scientific publishing community is something Authorea aims to promote — hence its freemium business model offering free usage to those who share publicly. Pepe compares the notion of ‘Open Science’ to the open source software movement.

“Users pay for privacy,” he says. “So, if a group of scientists creates a public article, thus making their research openly available to everyone, they do not pay anything. If they want to “close” their research and make the article only available to themselves, they have to pay and upgrade to a Premium account. This model encourages scientists to do ‘Open Science'”.

Pepe says he became interested in the open access movement and information science while working on computational high energy physics at CERN in Geneva. That’s also where he originally met his co-founder, Nathan Jenkins, who has had a career in scientific research after obtaining a physics PhD. The pair met up again in New York two years ago.

“I told him about my idea to make scientific writing and collaboration more fluid and modern, and we started working on a ‘Github for science’ which became Authorea,” adds Pepe.

Github is the competitor — or rather potential competitor — the Authorea team is watching most closely, according to Pepe. “Github will obviously move into spaces outside of source code,” he notes, dubbing it “the most dangerous competitor as well as potential acquirer, to date”.

Elsewhere, he lists Sharelatex.com and Writelatex.com as two “well-known competitors” for disciplines like physics and mathematics, where scientists use the LaTeX scientific documentation format to author their papers.

“For non-LaTeX users (the vast majority of the scholarly community, ~95%), Microsoft Word and Google Docs (if enhanced for scientific articles) are obvious competition,” he adds via email. “There are some other collaborative text editors online, Draftin, Hackpad, Medium and Penflip, but none of these editors are currently moving in the direction of scholarly publication.”

TechCrunch’s recent battlefield competition, at Disrupt SF 2014, also had a scientific collaboration startup on stage — albeit the company in question, Sciencebites, has a slightly different spin: its focus is on helping industry and academia collaborate, rather than linking pure-play research scientists.

Still, it’s a measure of the potential for shaking up scientific collaboration that startups are attacking the area from multiple angles.

Another key feature of Authorea will be a focus on the underlying data — and the formula/analysis that yielded that data — which underpins each scientific paper.

The platform aims to allow data and the analysis/formula used to produce what Pepe terms a “scientific image” to be shared too. The vision is that data reuse could become another way for scientists to build reputation — in addition to the current citation method, whereby they gain reputation credit based on how many times their journal paper is cited.

“We believe that the article of the (near) future is more than just text and images,” says Pepe. “The data and analyses that were employed to produce a scientific image will be available upon request so that anyone can reproduce the steps “behind” an image and thus a scientific result.

“These sort of data-rich articles are already possible on Authorea. The data-rich component is important as it makes science more transparent and it allows for a new reward system to develop: a system built not only on citation… but also on data reuse (a scientist’s data can be incredibly useful to another scientist and enable new scientific discoveries).”

Currently, Pepe notes that most scientific journals do not publish full scientific images because such data is often “too large and complex” to be included in a scientific paper. “Authorea allows you to include your data and algorithms so that you show the full workflow “behind” an image, making science transparent, reproducible (and “forkable”),” he adds.

Generating momentum behind the notion of data reuse as a scientific reputation builder is evidently core to the Authorea mission to drive Open Science. “There is a clear incentive for scientists to share the sources of their research because they will be reused (and thus cited),” says Pepe. “Similar to what is happening for programmers and Open Source, in science too, younger generation of scientists are moving to an open paradigm.”

“Putting your research work in the public does not mean losing out on ownership, rather it means claiming ownership,” he adds.

Commenting on the seed funding, ffVC founding partner John Frankel told TechCrunch: “Authorea is looking to address one, seemingly small, problem really well: enabling articles to be published faster than before. Everything they do leads to that, and that is a major issue that, when solved, will help advance scientific knowledge.  Simply put, it is shocking today how long it takes to go from discovery to sharing it with the wider world.”

“We were impressed by the intensity of the team’s passion to solve what is a massive, but not well understood problem. We believe that they are not only well qualified to understand the problem but connected and credible to get the attention of the institutions they are working with and will work with,” he added.