TouchPal, the Shanghai-based keyboard app, has raised a significant new round of funding as it looks to expand its presence in the U.S. and launches its third party keyboard application for iOS.

The company’s app is one of several third-party keyboards coming to the iOS as Apple opens up the keyboard for the first time.

TouchPal already has 200 million users worldwide on the Android operating system typing away in 85 languages in over 100 countries. The new round, which sources said was significantly over $20 million, came from Sequoia Capital, along with previous investors Qiming Venture Partners and strategic investors Qualcomm Ventures.

Already the default keyboard on smartphone brands like HTC, Sony, Alcatel, Huawei, and ZTE phones, the expansion to the iOS platform means that the company can compete directly with well-funded competitors in the U.S. and Europe, like SwiftKey and the publicly traded Nuance Communications.

Launched in 2008 by three former Microsoft employees, TouchPal uses a “freemium” model where users can download the keyboard for free, but pay for services like the company’s predictive typing and autofill features, which analyzes language and speech patterns to autofill messages for users.

“We thought the biggest bottleneck [in mobile computing] was the input experience for the touchscreen environment,” says TouchPal chief executive Michael Wong. “We wanted to build the keyboard for ourselves and our friends first, and later on we found that it was getting popular and we decided to launch it and bring it to market.”

The close of the round gives TouchPal new ammunition to continue its research and development efforts, according to Wong, and it comes on the heels of another victory for the company. TouchPal had been embroiled in a patent dispute with Nuance for the last year, since Nuance filed a claim against it with the U.S. International Trade Commission in December 2012. Late in 2013, the court ruled in favor of TouchPal and the company settled its case with Nuance.

“The case came after a failed acquisition of TouchPal,” Wong said.

With the case behind it and new money in the bank, Wong says that his company is forging ahead with new research and development. The company is launching a swipe feature allowing users to type out full sentences by running a finger across the keypad. TouchPal’s service automatically determines the sentence that best matches the finger stroke (it looks like the next generation of autofill).

Wong also wants to improve the artificial intelligence that drives the company’s contextual understanding. The keypad from TouchPal learns from users writing and speech patterns to create better predictions on what a message may be.

Additionally, TouchPal is going to plant its flag in the U.S., Wong says. The company is in the process of setting up an office and has made an offer for its first hire in San Francisco.

With competition coming fast and furious, now is the time to step on the gas, says TouchPal’s chief executive. “In the U.S. our penetration is pretty low. Most of our clients are targeting Europe and other markets and because of the litigation, they didn’t want to ship our products into the U.S. market.”

Now, expect to see TouchPal aggressively market on U.S. shores, even as the company looks to move beyond just keyboard applications. “What we are thinking about is not just the keyboard, but the user interface,” says Wong. “We already incorporate voice recognition into our keyboard. We are introducing some other ways to interact with devices… If you think about user interaction, it’s not only the keyboard, but voice and gestures all together.” 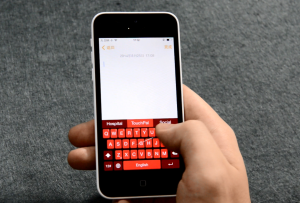