Superstar DJs Tiësto and Steve Angello of Swedish House Mafia, manager Scooter Braun, and agencies WME and AM Only have invested in Splice’s new $4.5 million Series A led by True Ventures and joined by Union Square Ventures. After 10 months in private beta, any musician using production suites Ableton, Logic, or FL Studio can now sign up for Splice’s public beta for free. Splice automatically saves and sync every change to a song and lets collaborators easily annotate and share works in progress.

To give listeners an earful of what Splice can do, it’s premiering its DNA Player today for jams made with the software. It visualizes each separate track that makes up a song, lets people mute or solo certain instruments, and leave SoundCloud-style timed comments. The DNA Player debuts with “Scream” from Henry Fong and J-Trick of Tiësto’s label Musical Freedom, which you can check out here or in the embed below.

Martocci tells me that creating music without Splice is a constant process of managing file saves and worrying your work isn’t backed up or can’t be changed. Cooperating with other musicians is also a pain because it’s tough to stay in sync, know who changed what, or why. That’s why he sees Splice as a crucial product that goes way beyond Dropbox. “It’s different than just knowing where they store their files. You don’t have to think about anything” he tells me. Eventually Splice will charge a subscription fee but it’s free for now.

Since the initial launch, Splice has been signing up top artists, getting their feedback, and throwing events. To demo its potential, Splice has been holding meetups where each musician works on a song for 10 minutes then passes it on to the next producer. Martocci says proudly, “You wouldn’t believe how amazing it is for these people lot collaborate and seamlessly collaborate.” 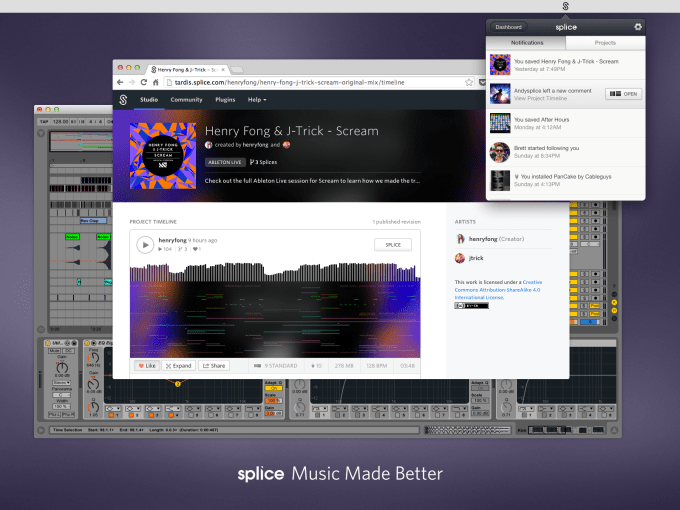 Now the focus is making Splice the default way to produce music. The $4.5 million Series A which included DJ Richie Hawtin’s Plus Eight Equity Fund LP, brings Splice to $7.25 million in total funding. Martocci tells me “A big part of what we are so excited for with this open beta is even more feedback to perfect our platform. We want to widen our network of artists and become a central part of the music creation process. This round of funding and investors involved will help us do just that.” Having DJs, managers, and agencies on the cap table and evangelizing for the product should go a long way.

The big challenge will be getting notoriously stubborn artists to change their creation process. “With GroupMe or any app I’ve built before, you have your way of doing things. But with this, you’re sort of taking their way of making music and bridging that to the cloud” Martocci admits. “We have to strike a balance between how we want to do things and their way of doing things.”

Even if you’re not a music producer, you can do things your way with the DNA Player. Every kick drum, vocal line, lazer gun, and “wobble” can be turned on or off, see annotations from the creators and other listeners, and leave your own.

By the end of the year, the plan is to have even more creation tools integrated with Splice. Martocci beams “Once these barriers to collaboration, come down I think it’s going to be a new world in music.”