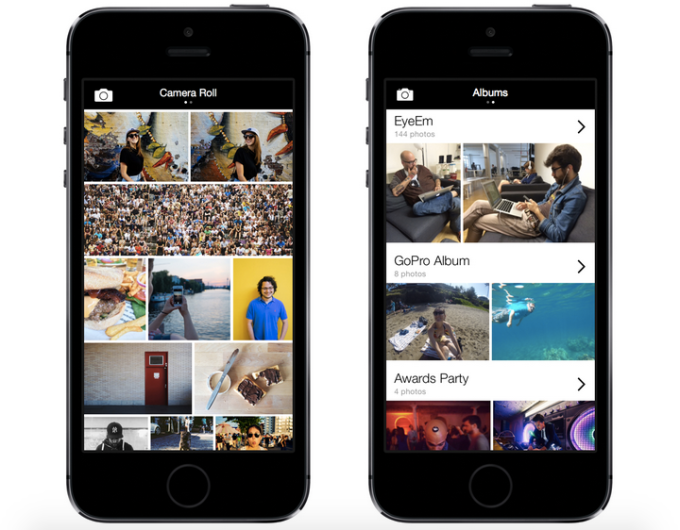 Photo-sharing service EyeEm has released an update to its iOS app that brings some niceties to the camera and camera roll interfaces. The changes make it easier to see which photos are worth uploading and to get them up with fewer taps and swipes.

As shown in the photo above, EyeEm has given up on the square grid for the camera roll, instead showing variable widths to highlight shots that benefit from their orientation. Getting to the camera roll is also faster than before, as you can simply hold down the camera button from any screen as a shortcut. Once there, you don’t have to choose an album, as it takes you straight to the most recently added, which EyeEm found most users go to by default anyway. If you were hoping to upload a photo taken with another app or saved to a specific album, a swipe to the left from the camera roll brings you to the album selection screen.

You can now preview your photos as you shoot in EyeEm by tapping the new button in the top right of the camera screen. This pushes the viewfinder down and opens a row of photos that resembles the new image preview in iMessage on iOS 8:

There’s also a new exposure toggle that lets you quickly change the brightness of your photos. It’s less precise than the hold-and-drag method Apple uses it the default iOS camera, but more useful for quickly adjusting for different lighting conditions.

The jump to iOS 8 brings some fun additions outside of the camera and sharing interface. EyeEm has added interactive notifications so you can reply to a comment, follow a friend who just joined on EyeEm, or submit photos in response to the services “Missions.” And with the new share extension feature in iOS, you can stick with the Apple camera and post directly from Apple’s camera roll.