Over the course of its life, Nexmo has long been open with its growth numbers. Unlike most private companies, it has kept the public mostly abreast of its revenue expansion, and hiring patterns.

The cynical response to that fact is that Nexmo has grown quickly, and so its sharing of usually hidden data isn’t too surprising. A simple rejoinder is that most companies, even firms that are doing well, still won’t share much in the way of hard metrics.

I met with Nexmo’s CEO Tony Jamous and another executive recently, digging into the company’s 2014 performance. Nexmo was, until 2014, profitable. The company ran lean in its early days — I first met Jamous when his company was operating out of shared space in San Francisco, despite having raised more than $3 million at that point, and recording revenues of around $4 million per month — but has since raised an $18 million Series C round of capital, and has increased its marketing spend as it chases growth.

The road to today:

According to Jamous, Nexmo’s run rate is now $72 million, up from $66 million in July.

A $72 million run rate is $6 million per month, or around 50 percent higher than its previously disclosed $4 million rate recorded in August of 2013, and up a slimmer 20 percent from March. Slower growth than you expected? Check the following chart of Nexmo’s SMS traffic: 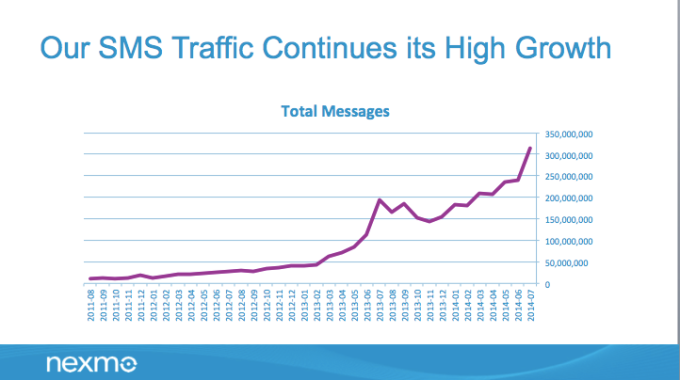 As you’ll note, around August of last year, Nexmo’s volume slipped for a period, though it more than recovered. The short-term revenue impact of the decline in SMS volume was likely attenuated by the company’s expansion of its voice services.

Nexmo told TechCrunch that it expects its full-year revenue to be $70 million, which it also claims on a document is a 100 percent increase from its 2013 figure. That would imply that Nexmo had full-year 2013 revenue of $35 million, slightly less than its August 2013 prediction. The above chart likely explains the difference.

In its current form, Nexmo looks healthy — a 50 percent growth rate in calendar 2015 would put its full-year revenue over $100 million, and its run rate would be higher than that figure. The company’s year-over-year API traffic growth is north of 400 percent.

Also, Nexmo told TechCrunch that it is currently accreting 5,000 new customers each month, around 7 percent month-over-month growth when compared to its current customer count. It has also rapidly staffed, with its year-end employee tally expected to reach 100.

Nexmo grew quickly, and then hit a several month speed bump in its SMS traffic. That period of weakness has passed, it seems. (It isn’t surprising that Nexmo was willing to share new data now, given that it is growing quickly again.) Provided that its SMS sales growth continues, Nexmo’s expansion shouldn’t struggle.

It’s worth noting the company’s SMS volume, as Nexmo’s revenue is mostly sourced from it. The company derived 12 percent of its revenue from voice services in the first half of 2014, and expects that figure to rise to 15 percent for the full year. So, SMS remains the majority of its income.

Nexmo grew by providing SMS services to the growing OTT market — Line, Viber and KaKaoTalk, etc. — something that has been a key strength for the company, and also a potential weakness: If consumers shift from OTT apps, it could turn down Nexmo’s volume and slow its growth.

The company told TechCrunch that it has 12 months of capital at current burn rates. When 2014 ends, I’ll check back with the firm to see what its final revenue tally for the year ends up being. For now, Nexmo is leaving a trail of information behind it that might make for a decent case study when all is said and done.

IMAGE BY FLICKR USER JAN-HENDRIK CASPERS UNDER CC BY 2.0 LICENSE (IMAGE HAS BEEN CROPPED)