Editor’s note: Joe Lonsdale is a general partner at Formation 8.

Early last year, I wrote an article explaining how our team views the concept of duty for leaders in the technology ecosystem. We believe that this duty involves looking beyond conventional startups to study complex industries and using technology to tackle the biggest problems we can find.

Our belief is based on an observation that many of the large industries in the U.S. are in some form of crisis, but few top technologists — and few investors — set their sights on fixing the parts of our economy that could have the greatest impact on overall prosperity and well-being (financial services, healthcare systems, government, education, agriculture, logistics, etc.).

Not so long ago only a few of us in Silicon Valley were building companies in these areas, but now we’re happy to see more and more entrepreneurs applying technology to hard problems in huge industries that will have lasting effects for people across the globe.

We think that Silicon Valley is at the very beginning of this important wave of innovation, and at Formation 8 we have partnered with dozens of these companies because we believe that improving these industries will enable general prosperity while also providing for the highest returns. Our philosophy is that many companies that present the greatest economic opportunity are also those that create the most value for society.

However, there are clear exceptions to this rule. In certain cases, market incentives fail to align, or even exacerbate an issue – and mission-driven non-profit organizations are needed to solve the problem. Technology is playing an increasingly critical role in these organizations and they are badly in need of our help.

The problem of child exploitation is a glaring example of such a scenario. Economic motivation has created a perverse and underground marketplace where children are bought and sold as slaves. It’s a harsh reality that exists in our own backyards, with thousands of children in the US alone – many from the foster care system or from broken families – being commercially exploited every year.

Many of these individuals are coerced into prostitution as teenagers, long before they are legally old enough to consent to sex. The average age at which girls are forced into this exploitation is 13, and this illicit market is growing and is now second only to drug trafficking, according to research from the Ashton Kutcher-backed non-profit, Thorn.  So far, the US government has been just as successful in stopping exploitation as they’ve been with drugs, and they need our help.

As with every other market, the proliferation of the Internet has driven activity online. Today these children are bought and sold on many of the same sites where you can source a roommate, sell your bike or find a job. Further, connectivity has also spurred an explosion in the online trade of child sexual abuse imagery. Peer-to-peer platforms and anonymous networks like Tor allow images and videos of the most egregious types of abuse to be traded globally, continuously re-victimizing these children and creating networks of people who connect with one another to share content and justify their behavior to one another.

There’s no economic incentive in trying to stop the spread of this content or to use the digital trail to identify more victims and stop the abuse, but there’s definitely a moral one.

The team at Thorn has extremely passionate and talented individuals who partner with government organizations and leading software and new media companies, and work with child exploitation experts to save children and attack the problem from multiple angles. Thorn’s partners include Facebook, Palantir, Google, Twitter, Microsoft, Salesforce, Tumblr, Twilio, SV Angel, Formation 8, and others.

While the financial support of Ashton and these allies is valuable, their technological expertise is invaluable. From machine learning to detect patterns in perpetrator behavior to complex data integration to the design of simple and useful UX, backed by tools such as semantic classifiers, for law enforcers to prioritize cases on online escort boards that may involve minors, it’s technology that’s providing new tools to fight back against these predators. 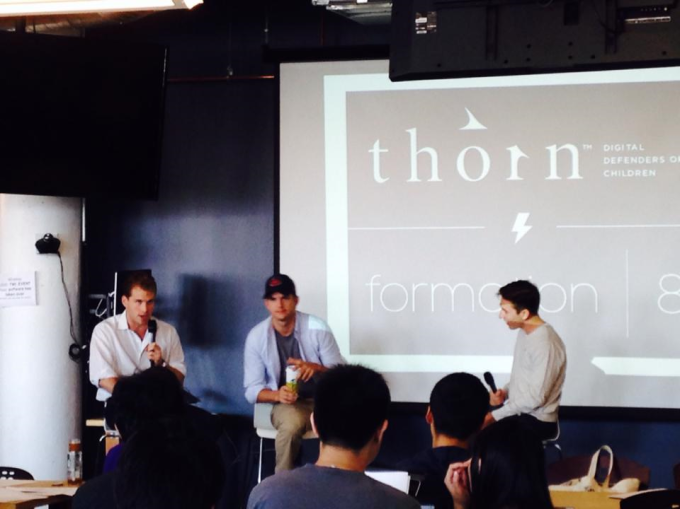 Joe Lonsdale (Formation 8) and Ashton Kutcher (Thorn) are interviewed by Pierre Arys (Formation 8) in front of the 25 teams at the anti-child-sex-trafficking hackathon at Twilio in San Francisco on August 23.

Engineers worked hand-in-hand with Thorn’s subject matter experts to develop a variety of tools that could be potentially used by the National Center for Missing and Exploited Children (NCMEC), law enforcement agencies, and other non-profit or government organizations tasked with working on these sorts of issues.

While there has been some public criticism of faulty statistics around child exploitation and trafficking, after interacting with the experts and others at Thorn and viewing the log data about U.S.-based searches for child-exploitation for context, it was clear to everybody how serious and widespread of an issue this is.

The event was hugely successful, with winning projects including visualization layers of perpetrator activity, databases of ontologies specific to child exploitation, and discovery methods for potential predators using bitcoin to pay for child sexual exploitation content.

These projects, along with many others, can be put to use almost immediately and the energy and creativity we saw these teams bring to bear on this serious issue was inspiring to all of us.

Traditional hackathons are fun and focused on skill and competition, but we believe that events which focus on the positive social impact of technology engage a wider and more diverse set of participants.

Lilli Oetting, who won second place with her partner Bowen Lu said this was the first hackathon she has ever competed in. “Hacking for the sake of hacking isn’t at all motivational to me, but hacking to diagnose a disease or catch terrorists or save a child from sexual exploitation is a great honor as well as an exciting technical challenge. In my experience, many women share the mindset that technology is most interesting in its application to social problems.”

Oetting, who is a rising senior at Stanford studying computer science, noted that this further substantiated earlier observations she had while teaching a class titled Code the Change: Learn Web Development Through Nonprofit Projects. “It was by far the most gender-balanced computer science class I’ve been a part of,” she said. “Over half the students were female.”

We hope we can continue to highlight additional amazing role models in our community who are not only very respected technologists and leaders, but are engaged in great social causes. We want to inspire everyone to recognize the positive social impact they can have if they choose to become technologists.

Ashton’s leadership on this issue continues to be inspiring – at the end of the hackathon he announced that he’s sponsoring three $100,000 fellowships for data scientists and software engineers who want to continue working with Thorn.  We’re excited to see what can be accomplished with that kind of team, given how much progress was made in just a weekend.

The reality is technologists hold great power in the world, and not only does big industry need our help right now, but so do a lot of the most important causes. My first company, Palantir, has also engaged in anti-child exploitation technology work pro bono with NCMEC, a variety of anti-human trafficking work, as well as other pro bono technology-enabled causes such as sophisticated disaster relief in Haiti, Philippines, and elsewhere with the Clinton Global Initiative.

I’ve also been inspired by the philanthropy work at Salesforce, Google, and other companies. While it can be overwhelming to realize how many problems there are to solve in the world, it’s always inspiring to see so many talented people willing to spend their time and energy in hopes of making a difference. We are tremendously appreciative of the work our hackathon participants did in hopes of potentially rescuing even just one child from exploitation; we believe the work that was done will save many.

We urge any technologists who might be reading this – and the leaders in our community – to think about what you are working on, and how that is impacting those around you. There are few other communities who have ever had similar potential to create widespread and scalable progress, or to positively impact so many lives.

We sit at a very unique place in history, and I hope that our peers in Silicon Valley will continue to remind and inspire each other about the role we can play in the world.

Special thanks to Del Harvey, Julie Cordua, Claire Schmidt, Drew Oetting and Pierre Ayres in the writing and editing of this article.