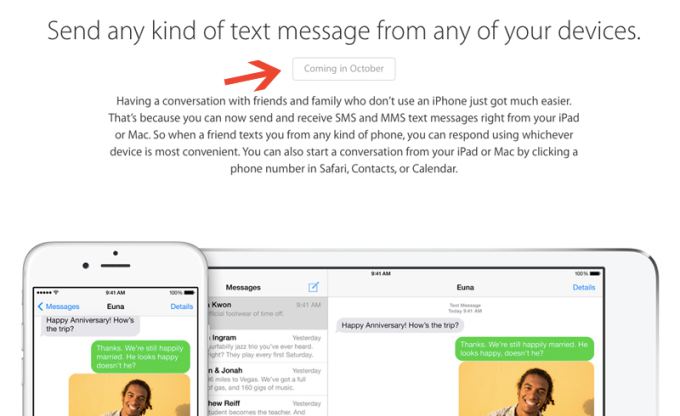 Most of iOS 8 will ship then, anyway. According to a newly discovered footnote on Apple’s site, one of its key features still needs to cook for a few more weeks.

As spotted by 9to5mac, iOS 8’s SMS Continuity feature (which lets you use your laptop/iPad to receive and respond to texts sent to your phone, including standard, non-iMessage texts) won’t be going live until October.

It was always fair to assume that the Continuity features would come a bit after the rest of iOS 8, given that everything Apple has mentioned so far seemed to imply much of it relied on OS X Yosemite. Yosemite hasn’t been given an official launch date yet beyond “Fall”.

Curiously, SMS Forwarding is currently the only part of the Continuity feature set with the “Coming in October” note. Features like Handoff (which lets you do things like start an email on your Mac and continue it on your iPhone with the tap of a button), automatic tethering whenever there’s no WiFi, and forwarding calls from your iPhone to your Mac are left dateless.