The calendar app market has been getting crowded with apps like Cue, Sunrise, Timeful, Accompli, Lowdown and others vying for attention. One that I’ve been using has been Tempo, mainly for its fully-integrated approach, such as Uber integration and automated call dialling.

The maker, Tempo AI, is now doing a push into Europe with localised language support in Spanish, French, Italian, German and Portuguese. 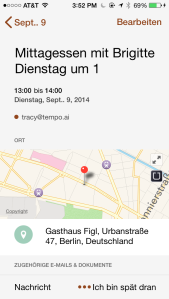 CEO Raj Singh has a vision of turning the smart calendar into a platform for a powerful personal assistant app. Which is why it’s noteworthy that Tempo came out of SRI, which was also the birthplace of the voice-powered personal assistant Siri.

Tempo can find phone numbers inside calendar appointments, a flight status or last email about the meeting, and surface it in a simple manner.