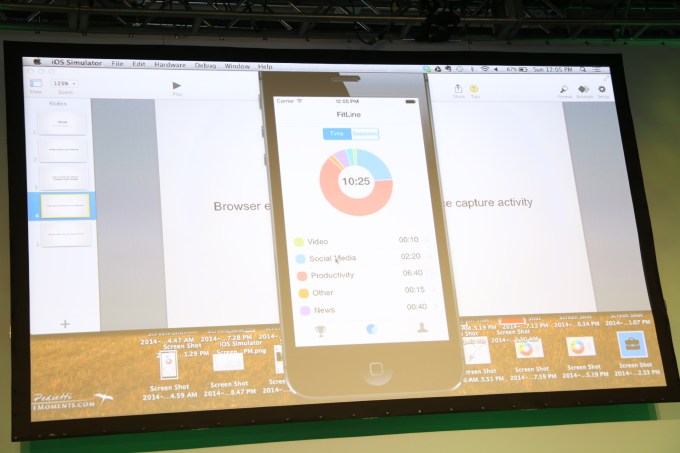 If you’re the kind of person who attends hackathons on a regular basis, chances are you spend some of your time on your laptop or smartphone on activities that, in hindsight, probably aren’t actually worth your attention.

Knowing its audience, a team of hackers from advertising tech firm Rubicon Project came to the TechCrunch Disrupt Hackathon with an idea in mind: an app that collects your web and app usage and presents that data like the fitness-tracking apps from Nike or Fitbit. It only collects how much time you’re spending on each activity at a high level, so it won’t know whose pictures you’re looking at on Facebook — just that you’ve had that tab open for 20 minutes.

FitLine’s presenter, Saket Saurabh, told me that the idea for the hack came from his wife telling him he spent too much time on Facebook. As he began his retort, he realized that he didn’t actually have numbers to back up his defense.

Saurabh and the three other hackers who built the FitLine demo managed to build data-collection tools that work across platforms. For today’s presentation, they built an app for Android that records how long you spend in each app and sends it to their service, as well as an extension for the Firefox web browser (which Saurabh says could be ported to Chrome pretty easily). He also said that Apple offers APIs for iOS that would allow them to build a launcher that tracks app usage on the platform, though Apple may not be happy with using it for their purpose.

I’m a big fan of fitness-tracking apps and gadgets, so the idea of getting people to change their behavior by showing them what their current habits look like appeals to me. FitLine is especially cool because it’s easier to work into your life and doesn’t have laziness working against it — instead of visualizing how little I’m exercising in order to get me motivated, it’s showing how much time I waste in the aggregate. It seems to me that figuring out how to spend less time doing something wasteful is easier than making time for something most people don’t really want to do.

We had a quick chat with Saurabh after his presentation: