Alibaba, the Chinese e-commerce giant run by Jack Ma, has submitted F-1 paperwork to the SEC with the expectation that it will go public on September 8 under the NYSE symbol BABA.

The filing appeared on SEC.gov today. 20.1 million shares will be on offer. Japanese investor Softbank currently owns 34 percent of the company while Yahoo owns 22 percent.

The initial price is expected to hit at $60-66 per share with an initial valuation of up to $162 billion. At that valuation, Softbank’s share of the firm is worth around $55 billion, and Yahoo’s stake is worth more than $36 billion.

In after-hours trading, Yahoo is up more than 1 percent, implying that investors in the American Internet giant are content with the Alibaba offering price range, but not surprised on the positive side. Yahoo ended the day worth just over $39 billion. Investors are therefore valuing Yahoo somewhat slimly when compared to the expected market value of its Alibaba shares.

The proposed valuation alone would make Alibaba and its subsidiary Taobao the second most valuable Internet company after Google. The Wall Street Journal, however, is expecting a valuation of $155 billion, still far from shabby. You may now commence the pricing guessing game.

Earlier estimates pointed to a filing in last week in August, a slip of about a week from market expectations. 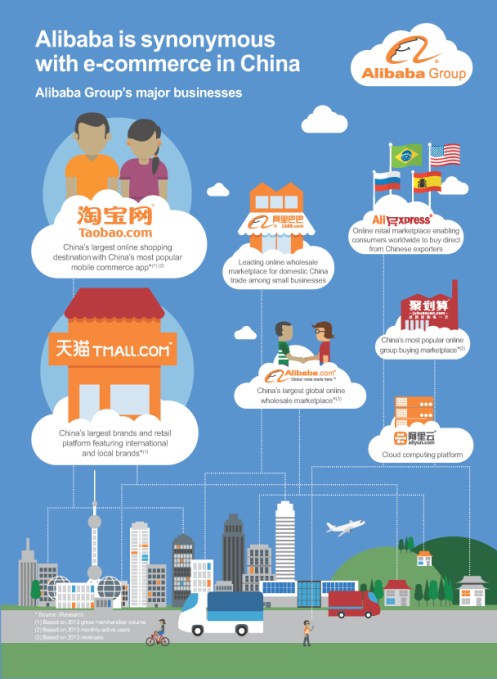 Alibaba is a strange beast, an amalgam of Amazon and eBay. It does not actively hold inventory and instead connects buyers and sellers who complete the transaction. The IPO, if all else holds, could be the largest in history. Current investors are maintaining their stake in the company, although Yahoo will reduce its percentage slightly.

The company is massive, and massively profitable — its revenue in its most recent quarter totaled $2.54 billion, with profits tipping the scale at just over $2 billion. The company’s margins are therefore more than impressive. Investors have a keen eye on that metric. Yahoo’s shares sank after Alibaba once reported a decrease in its operating margin.

Alibaba’s massive IPO will set records, and even dwarf the company’s already large cash position of $16.97 billion, measured on June 30 of this year.

Investors are likely betting that Alibaba will continue not only its impressive profit margins, but also its quick topline growth. One metric to keep the pulse on when it comes to Alibaba is its number of active buyers on its platform: The company picked up 24 million between the March 31 of this year, and June 30, ending at a total of 279 million.

As a final caveat, the Alibaba IPO can be viewed as a slight proxy on the Chinese economy. Something to keep in mind.