Groupon’s international business today got a little bit smaller — 92,043 square miles smaller, to be exact. The company has decided to wind down its operation in Romania, effective today, after it failed to find enough traction in the market. The news was sent out in an email to its merchant partners in the country signed by EMEA VP Luke Massery, which we are copying below, and we have confirmed the details with Groupon directly.

“After a thorough analysis of the Romanian market and taking into account all relevant factors, we have decided to close our business in Romania,” a spokesperson noted in an emailed statement. “A combination of the macroeconomic situation and the low internet penetration in the country made it difficult for Groupon to gain desired critical mass. Shutdown of our operations in Romania is in effect from 03.09.2014.”

For those who have already bought Groupons, or for businesses that have offered them on the platform, they will have them honored until the date originally agreed. Alternatively, customers will be able to get refunds for any unused Groupon deals that they have purchased.

The spokesperson confirmed that there would not be further closures in other countries, calling Romania a “special case” in the region. “Our EMEA business is doing well,” she noted. “[The] Romanian business hardly shows up in total sales, due to its small size.”

You might be thinking, “Why should I care that Groupon is shutting down its operations in this little, beautiful (see above) country of 20 million people known best for things like the Dracula legend?”

In a way, you are right. But on the other hand, Groupon in Romania underscores the opportunities and challenges for Groupon and other e-commerce hopefuls.

The Romanian operation first opened for business around four years ago, when the Samwer brothers, who sold Groupon clone CityDeal to Groupon in 2010, were still running things. It had around 40 employees.

Romania is on the “still developing” side of the digital divide in Europe, and as with many other countries in that category, e-commerce sits as a gateway service to other tech developments. Over the next two years, a number of other local deals sites emerged in the country, peaking to around 100 in 2012, local publication Wall Street notes. But perhaps due to the lack of quality, mixed with a lack of interest and infrastructure, that number declined steeply in more recent times.

The wider context for Groupon in Europe is that the company has had some challenging years in the region after its CityDeal acquisition, with a lack of operational, technical (and maybe cultural) integration between what was happening in the U.S. and in Europe.

That is one of the reasons why Groupon so often launches new services in the U.S. that cannot be rolled out concurrently elsewhere (one example: the timed reservations feature that Groupon launched today).

This is now changing, though. Although Groupon in the last quarter reported flat gross billings in the EMEA region compared to a year ago, revenues have been a more encouraging story, with EMEA seeing the highest revenue growth of the three regions: 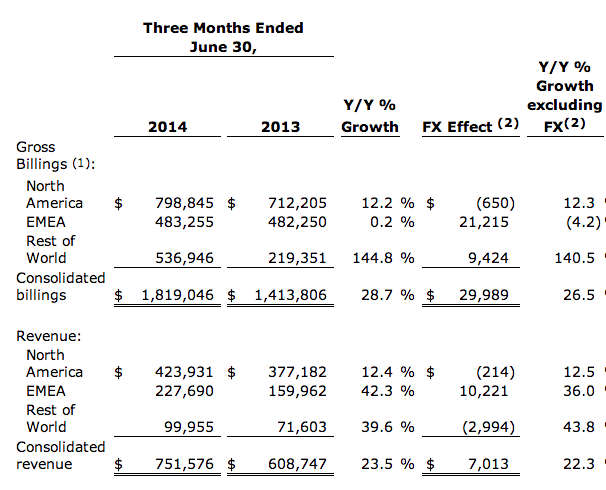 Still, the company’s last earnings report disappointed investors with the company failing to meet analyst estimates. With North America continuing to be Groupon’s growth engine, it’s not a surprise to see the company cleaning house and looking to firm up underperforming operations elsewhere. Whether that strategy will manifest in other ways is still to be seen.

The letter in Romanian is below, followed by an English version via Google Translate: 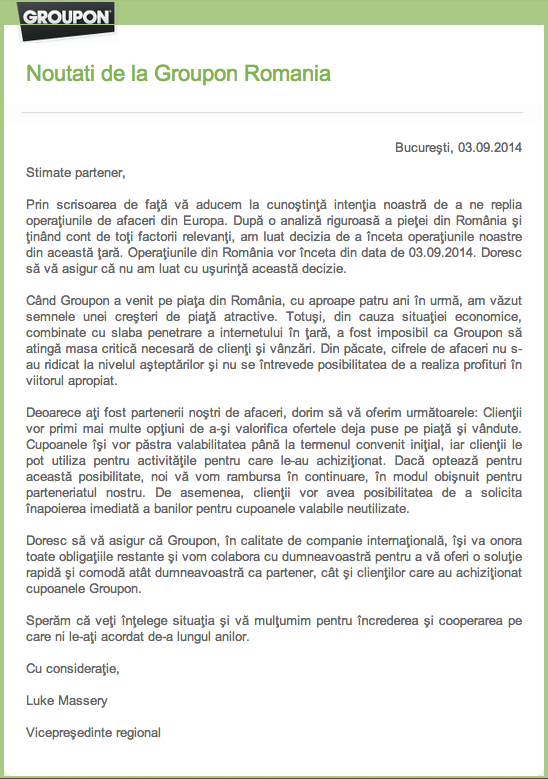 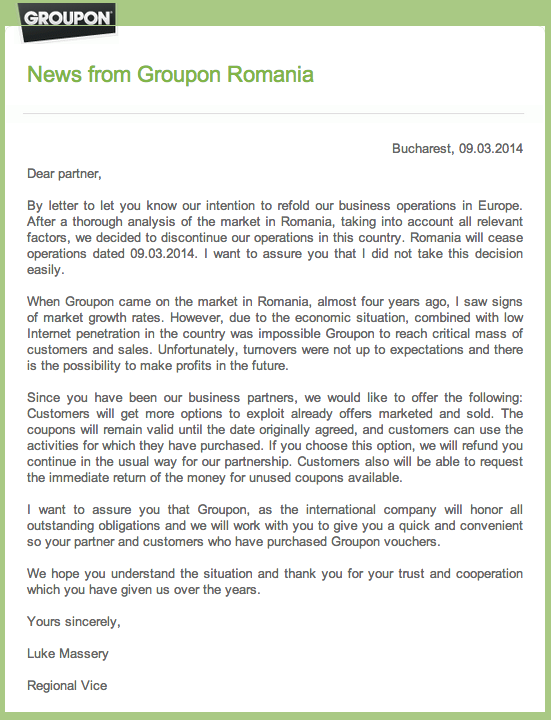