LinkedIn over the weekend launched a standalone version of its “Sales Navigator” service, which is now available on iOS only. The addition of the new, native application follows a recent overhaul for Sales Navigator that saw it split off as its own product, rather than a set of features within the main LinkedIn website. At that time, the company promised mobile apps would soon follow what was then the desktop and mobile web debut of the upgraded social selling platform. [UPDATE: See below]

Sales Navigator, for those unfamiliar, is designed for those tracking and managing sales leads via LinkedIn.

The service recommends sales leads you should connect with, allows you to track updates and news related to leads and companies, and find mutual connections, in order to be introduced to relevant people. It also integrates with both Salesforce and Microsoft Dynamics, so it can serve as extension to those more powerful systems. 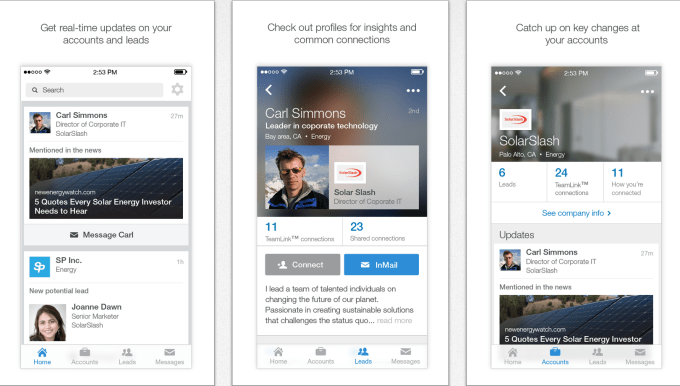 Now on iOS, the new app promises real-time updates on accounts and leads, the ability to view leads’ profiles, save leads, find “common connections,” as well as the ability to read LinkedIn InMail while on the go.

The app has a clean, iOS 7 and 8-friendly look and feel, with lots of white space, readable fonts, flat icons, big images and simplified navigation.

In order to use Sales Navigator on mobile, you’ll need a paid account – as you would on desktop or mobile web. The pricing starts at $99.99 per month for those who commit to an annual plan, but goes up to $129.99 if you’re paying month-to-month.

The app itself, meanwhile, is a free download here.

With Sales Navigator, LinkedIn follows the now common trend which sees larger companies splitting off a number of their core features into separate applications on mobile. LinkedIn has previously launched (or bought) apps for news reading (via its Pulse acquisition), job searches, recruiting, contacts, and more.

UPDATE, 9/2/14, 4:30 PM ET: LinkedIn says the app went up prematurely and the company is still in the process of finalizing some of the functionality. Says a spokesperson, “we’ve taken the app down in order to create the best customer experience possible, and plan to make it available in the next few weeks.”