Cotap, a startup founded by former Yammer executives Jim Patterson and Zack Parker that launched last year with the premise of becoming a “WhatsApp for the workplace“, is today unveiling a new build of its product, and a wider remit. Cotap is going beyond mobile messaging and moving into file sharing, with integrations with Box, Dropbox, Google Drive and Microsoft OneDrive; adding web and desktop apps (native to Mac first) to use Cotap when you are not on a smartphone or tablet; and releasing updated mobile apps for iOS and Android.

The moves come as the company passes 10,000 business customers — although it is not specifying what that translates into in terms of individual, active users just yet, says Patterson, who is Cotap’s CEO. The aim is to hit one million users, which has yet to happen.

As a bit of background on Cotap, current customers typically range from between 50 and 100 employees and include businesses like Philz Coffee and the Hyatt chain of hotels.

And, as we’ve noted before, what’s interesting about Cotap — beyond the Yammer pedigree and backers (which includes the likes of Charles River Ventures, which also backed Yammer before it sold to Microsoft for $1.2 billion) — is that it is trying to go beyond the typical enterprise IT product and messaging app by targeting more than just the white-collar segement of office workers and their employers as clients.

In other words, for a client like a cafe or a hotel, users include not just those in the back office, but those working at the front line of the retail experience. “Think of Cotap on a smartphone as replacing and improving on how a large business might have used a walkie-talkie,” Patterson explains.

The Box, Dropbox, Google Drive and OneDrive integrations that are being announced today are a part of that bigger concept, Patterson tells me, with the idea here being that you can send flyers to staff with information, pictures of lost property, or other communications — as well as the latest marketing strategy.

The integrations are also notable because they are all built on top of Box’s Box View, a standalone service that Box launched earlier this year that lets users upload, convert and view content. After a user has connected up the service in question, sending a file, Patterson tells me, is as easy as sending a photo in a messaging app. Cotap also used Kloudless as an API layer across all four to power search and to surface recent documents.

Effectively, what it means is that Cotap sits as the mediation point between the four storage services — imporatant since in many businesses you often end up with a mixture of services between official company accounts and those you have created for your own documents when you are working on a nonwork device. Recently modified files show up first on Cotap.

Meanwhile, the web and desktop apps are perhaps a tip of the hat to those who are more bound to be sitting in a chair with wheels at the ends of its legs, Patterson tells me.

“Cotap launched initially with iOS and Android but being mobile first doesn’t mean mobile only,” he explains. “A lot of our usage was driven by people using iMessage before, and they would like to continue to go seamlessly between what they are doing at their desk and what they do on mobile.”

Synchronised notifications between the two will mean that notes that are read on one platform will be marked on the other, and discussions or projects initiated on one can be carried on elsewhere. 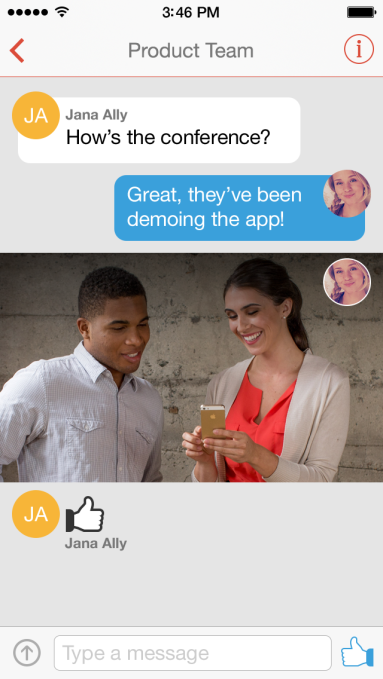 The mobile app updates create better parity with the desktop app functionality, with users now also able to set up favorites, and groups.

When Cotap first launched last year, I was curious about how it would differentiate from Yammer — another enterprise app and product that taps into the idea of consumerization and social media. The answer I got was that Cotap was “almost the opposite” of Yammer.

While Cotap continues to expand what it is trying to be to its users, Patterson maintains that this is something that has remained constant.

Similarly, he is less concerned with what a new, buzzy service like Slack might pose as a competitive threat.

“I look at Slack as an internal email replacement,” he says. “It’s topic-based chatrooms that are more similar to IRC or Hipchat.” Which is how Slack’s Stewart Butterfield has also described it. “If you are a small company and are still using email internally, something is wrong. You should change over to something like Slack if you are communicating at your desk. Especially if you are a dev shop, it’s great for development teams. They are integrated with Github and the other tools that they use.

“But Cotap is about targeting the wider array of businesses. It’s grocery stores and consulting firms. It’s not inside baseball.”

The new apps are available today in the Mac App Store, the iTunes Store and Google Play, with the web app soon to come.