The Pac-12 conference is launching a live YouTube channel for international fans, featuring 24×7 coverage of the conference’s sports teams.

Fans in 27 countries will be able to watch live games, studio shows, and re-broadcasts of games on the Pac-12 Network on YouTube starting on August 26. Marquee games between Pac-12 teams, like Oregon-Stanford, that are broadcast on networks like ESPN and Fox will not be live on the YouTube channel, but re-broadcasts of those games will be shown on the network in the future.

International fans can subscribe to the channel for $100 per year or $15 per month. 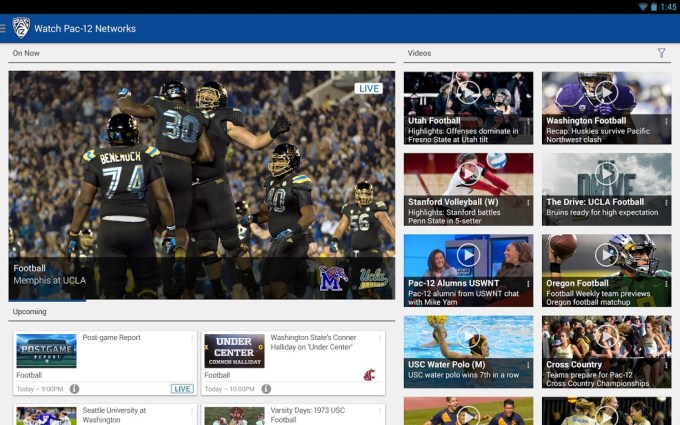 Pac-12 Networks is also releasing a new native Android app today, which has been redesigned with a focus on live video. Aufhauser says the conference has seen usage of Pac-12 Now, its TV everywhere service that lets fans watch live games on a variety of devices, more than double in the last year. Pac-12 Now is now available across iOS, Android, and Amazon Fire devices, and, of course, on the web.

Immediately, these new products show that the Pac-12 is committed to connecting fans to content wherever they are. But it could also be a part of a much more significant shift.

Cord-cutting has been a major trend for some time now, as consumers abandon bundled cable packages for Netflix and the like. Live sports are one of the most attractive aspects of a cable subscription for many consumers. A number of events, most recently the O’Bannon vs. NCAA antitrust lawsuit, have been eroding the power of the NCAA as an organization, and giving more autonomy to the so-called “Power 5” conferences, one of which is the Pac-12.

Thus, if the Pac-12 Networks has success with its unbundled international offering, it could experiment with an unbundled domestic offering, as could other college power conferences and professional sports leagues. Now, there are still multi-year, billion-dollar TV contracts in place for most of the best sports leagues. So this would be years into the future. But I can still hope for a day when I can pay to watch high-quality live sports without also paying for the Disney channel.

Disclosure: I have accepted a role at Khosla Ventures beginning in September. Since accepting this job, I am not covering any of the firm’s portfolio companies.