GoDaddy has closed on the acquisition of MailChimp competitor Mad Mimi, the companies are announcing this morning. The move is meant to further expand the web hosting provider’s product suite aimed at small businesses, while filling a hole in GoDaddy’s line-up where it was previously lacking a more solid email marketing service.

Until now, explains Steven Aldrich, GoDaddy’s SVP of Business Applications, the company offered an older product called “Easy Email Marketing” which it’s now planning to replace with the Mad Mimi technology. In addition to simply being a weak spot GoDaddy wanted to correct, Altrich adds that Mad Mimi was chosen for its great customer service experience – something that GoDaddy wants to bring to its own small business owner customers.

Terms of the deal were not disclosed [update: see below, deal is for $42m + $3m in bonuses], but Mad Mimi had very little in terms of funding, having been largely bootstrapped since its founding back in 2007. The company was also profitable, but declined to share specific numbers. 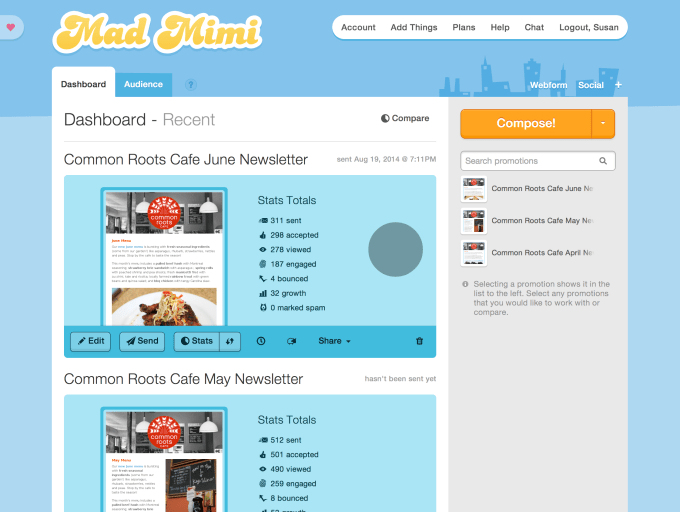 Headquartered in Brooklyn, New York, founder Gary Levitt, once a part-time jazz musician and part-time busboy, happened on the idea after first trying to build a web app for musicians like himself who wanted to offer an online press kit. He raised a whopping $7,000 from his father-in-law to hire developers, but says the project “crashed and burned” as he began to realize there was no way to build his app for that amount.

But he kept working at it, until, halfway through the project, he decided to scrap the idea in favor of an email service instead.

“I was always having a hard time finding an email service that was good for me because I was a musician,” explains Levitt. “Up to that point in 2008, all email services were identical. They were all doing templates…if you didn’t like a template you had to switch it,” he says.

So with Mad Mimi, he decided to use content blocks which would allow for better customization.

“I focused on total, basic simplicity, because that’s all I could afford,” says Levitt.

The service, when launched, slowly began to grow. 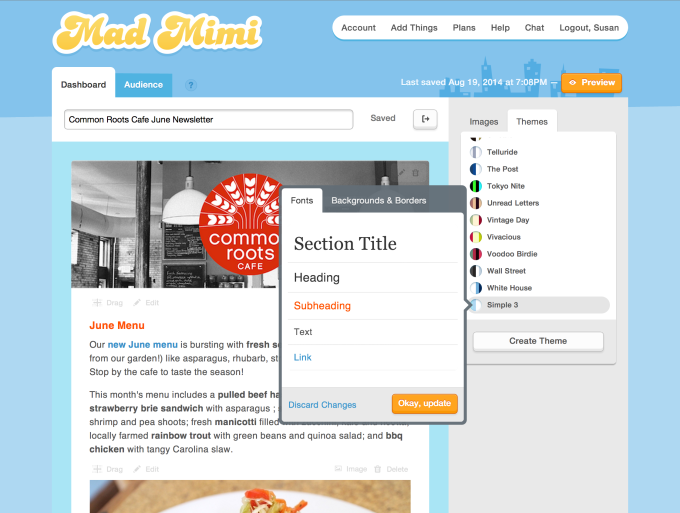 “There was no marketing, no funding, no fancy VC’s involved, or fancy launch parties, or fancy anything,” he says of Mad Mimi’s early years. “It was really just me working from a coffee shop until there were two employees, then three, then four. Then, all of a sudden, there’s 36 employees.”

Today, most of Mad Mimi’s customers – and there were around 250,000 at the time of the acquisition – were on the free tier of the service. The company was sending out 50 million-plus emails daily. It had also attracted a few big names over the years, many of which were using Mad Mimi for internal corporate communications, including Disney, Aol (disclosure: TechCrunch parent company), StumbleUpon, Timbuk2, Air Canada, Seth Godin, Kellog’s, Jelly Belly, Facebook and others.

Levitt says that joining GoDaddy made sense, as it was the “most logical partner in the world” and the two shared the same customer base.

Mad Mimi’s distributed team will now join GoDaddy (but not relocate), and the Mad Mimi technology will be offered to the larger company’s 12 million users sometime next year.

GoDaddy has been snapping up a number of small business-related startups in recent years, as it tries to compete by way of better, more modern technology for the small business customer. Other notable acquisitions have also included Locu, Media Temple, Ronin, Afternic, M.dot, Canary, and Outright.

“On August 19, 2014, we completed a business acquisition for
consideration consisting of cash of $42,000 and up to an additional
$3,000 payable upon the achievement of specified milestones.”

Those figures are in the thousands, so that would be $42 million, plus a potential bonus of $3 million.

(Hat tip to George Kirikos of Leap for spotting the filing.)