Russia’s online music businesses march to the beat of their own drum. But they’re about to get one well-financed leader to call the tune as music streaming service Zvooq closes on $20 million in new funding.

One of the critical problems for music in Russia is online piracy. Indeed, last week, a group of record labels including Sony Music Russia, Universal Music Russia and Warner Music UK went to court to push the social networking site VKontakte to enforce the privacy laws already on Russia’s books.

According to the BBC report, companies with legal streaming music services like Yandex, Trava, iTunes and Deezer all suffer as a result of the widespread piracy throughout the country. Russia’s national market tracker for digital music, IFPI, noted that the average spend per day in the country is roughly 50 cents per capita, compared with $8.40 for the rest of Europe.

In a recent International Federation of the Phonographic Industry survey of Russia’s digital music scene, recorded revenue in Russia for the full year totaled 2.2 billion roubles (roughly $61 million), that’s a fraction of the money that could be spent online.

Enter Zvooq. The company’s name means “sound” in Russian, and its mission is to end the tyrannical sound of silent cash registers for Russian musicians with a tiered pricing structure making it easier for Russians to pay (at least a little) for the music they want to hear.

Unlike Spotify, or similar streaming services in the West, which have a one-size-fits-all approach to streaming music, Zvooq, and others like it, believe in a pay as you go model for music consumers.

Founded by serial entrepreneurs Victor Frumkin and Simon Dunlop, Zvooq began as an idea the two co-founders shared in 2010, according to Frumkin.

Each of the services is unbundled, allowing Zvooq to function as the legal streaming music engine for social networks, telecom companies, or any hardware manufacturer that might want to offer music as a feature, the company’s executives said.

Based in Moscow, Zvooq’s business plan was attractive enough to win over an investment from Ulmart, Russia’s online electronics retailer, and the Finnish private equity firm Essedel Oy.

The company is launching its services with two of the three main telecom operators in Russia and its app has already reached the top spot in the app store for iOS in Russia.

“We think we’re a game changer in this market,” says Frumkin. 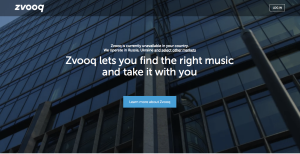