Digital publishers are increasingly reliant on content shared with social networks like Facebook and Twitter to drive readers to their sites. Naytev hopes to optimize the way content is shared by A/B testing headlines and images that make their way to those networks.

The Y Combinator startup helps digital publishers increase their traffic and engagement by improving the content that readers share on their social networks.

Previously publishing companies have mostly focused on enhancing the content they share on their own social networks and increasingly hiring social media specialists to help them drive traffic to their posts (Tech Crunch recently brought on social media expert Travis Bernard). But Naytev takes a bottom-up approach, using what its founder joked was “weird wizardry” to ensure the link provided to readers when they share an article on Twitter or Facebook will gain the most traction.

Naytev accomplishes this by experimenting with several different versions of the headline and image for the post. 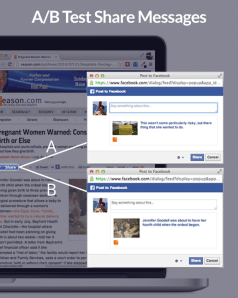 The platform also allows writers from the publication to write their own headline options. Then each time a user shares a post, Naytev shares a different option. After the post is shared several times, Naytev uses the headlines and images that have gained the most traction.

Naytev co-founder Zack Liscio says as more people read the news on their mobile devices, this technology will be even more important to content providers.

Not only does this function increase website traffic by driving more of a reader’s friends or followers to the website, it can also help a publication tweak its own posts to fare better on social media. Publications can look at which version of the post is getting the most traffic and engagement, and then use that on main accounts.

Liscio said the startup has already partnered with some major publications, including the Wall Street Journal’s MarketWatch and Reason Magazine. Liscio also said most companies that use Naytev experience about a 30 percent bump in traffic.

Naytev’s four founders bring a range of backgrounds to the startup, which received Y Combinator backing only weeks after they shipped the first draft of the code in the spring. Liscio has worked for Google and has been involved with several other startup projects. Patrick Costello has worked primarily in energy and also several startups, and Edward Ridgely came to the project from LivingSocial. Michael Seid came to Naytev after his own stint in the news business, working as an engineer at NPR.

Although Naytev is primarily interested in working with publications for now, Liscio said the company could be used by any vertical trying to get a message across on social media. Politics may be the next step for the company, which began testing the product with a political party.

“I absolutely believe campaigns in 2016 that use Naytev will have the best chance of winning,” Liscio said.

Sign-ups are free, which has allowed Naytev to gain traction among small publications and websites since it first launched in beta in June. Naytev also offers pro and enterprise services for an additional cost that offer additional analytics, custom branding and Facebook insights.