Two executives from marketing tech company Visual IQ are striking out on their own with a new startup, Conversion Logic, which promises to help advertisers track the effectiveness of their video campaigns across devices.

As consumers engage with media and ads on smartphones, smart TVs, and more, ad attribution across those devices (say, when you see an ad on your phone but buy it on your laptop) has become increasingly important — in fact, Facebook announced yesterday that it will be offering its own cross-device data to advertisers.

CEO Trevor Testwuide, who co-founded Conversion Logic with COO Alison Lohse (they both held vice president roles at Visual IQ), characterized existing solutions as “first generation” technology. Conversion Logic’s goal is to address what he said have been the four big pain points — reducing friction in accessing this data, prioritizing automation, getting closer to real-time reporting (closer than, at least, monthly or weekly reports), and making the data “consumable and actionable.”

When asked for more specifics on his last point, Testwuide said that instead of forcing users to log into Conversion Logic itself, the company will be “opening up the APIs and seeding the output of our science into platforms like DSPs and bidding platforms.”

Cross-device attribution, he added, is “relatively new technology that came into the market in the last three-ish years. In the beginning, the only constituent at an advertiser was the analytics professional. We’re just at the tail end of the early adopter phase, where this has moved from the analytics professional to advertising and marketing, then to strategy and then media. … Our clients are any data-driven company that wants to optimize ad spend in a holistic way.”

Behind the scenes of the product is Conversion Logic’s data science team led by Jeong-Yoon Lee, formerly the lead applied science engineer at Demand Media. Testwuide said the team is developing “an advanced algorithmic approach” to determining when the same user is accessing multiple devices. 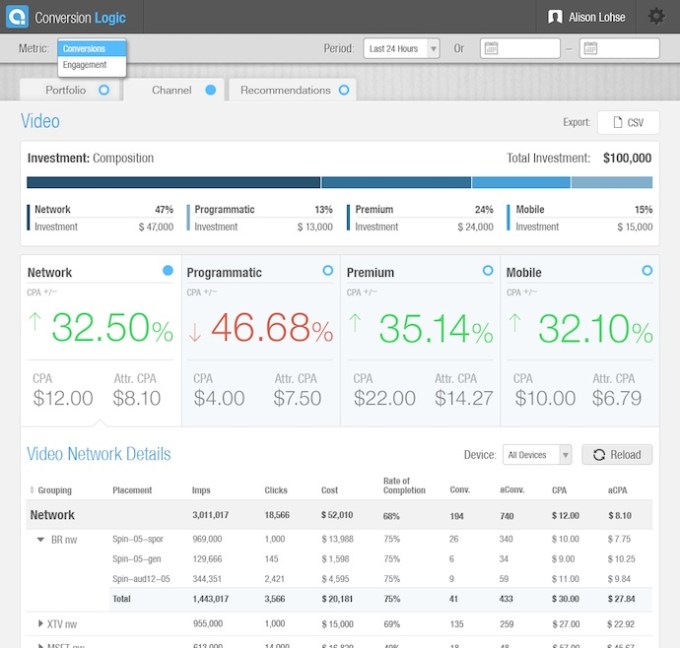 In addition to officially launching today, Conversion Logic is also announcing that it has raised $1.1 million in what Testwuide called a “founders’ round” from investors including Brian Baumgart of Gradient X (acquired by Amobee), Kim Perell of Amobee (ditto), Evan Rifkin of Burstly (acquired by Apple), and Clark Landry from Shift.

The company is currently developing the product in collaboration with a few clients, and it plans to bring on its first paying customers this fall. While it’s focused on video initially, Testwuide said he hopes to expand to other ad formats. And while Conversion Logic is working closely with its initial customers, Testwuide said, “We’re not here to build a consulting company. We’re here to build a SaaS company, with some client services on top.”