Craigslist has come to be known as a modern take on the classifieds section of a newspaper, but Zachariah Reitano and Henri Stern want to go further and provide a real-time exchange service. That’s where Shout comes in.

Shout is a real-time classifieds app that lets individuals exchange anything with others on the service. The iOS app lets users offer up something for sale, such as a ticket or a reservation, or make a request, such as a delivery. “Shouts” are linked to a location, a price and a short description and can either be free or cost a specific amount.

Once a user accepts a Shout, they are put into a real-time chat to clarify details and then they can pay within the app.

The service, which is only available in New York City right now, is largely being used to sell tickets for concerts or Broadway shows, but co-founders Reitano and Stern say that several actors have joined the platform to offer services such as delivering a rose while reciting Shakespeare, or pranking friends and sending the video to the user. 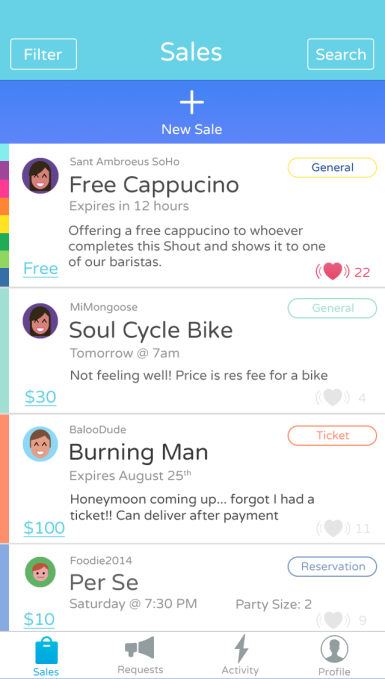 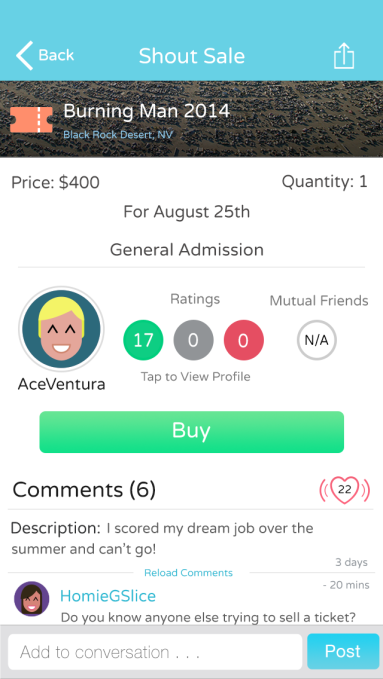 The Y Combinator-backed company handles the transaction life cycle, verifies the seller, processes payments and takes care of customer support. The app, which will make its way to Android, has different categories such as “Tickets” or “Everything,” where you can limit your search to what you’re looking for.

Most players in the classifieds space such as Yakaz or Antego are more similar to Craigslist where the approach to list and sell items is more linear. Shout wants to build a safe community within its service and allow users to leave it up to their imagination on what they want to use the platform for.

Stern says he hopes universities will implement “streams” such as a NYU stream or Columbia University stream where user bases will be specific to that area and can build a better sense of community. Some local coffee shops are offering free coffee to get to know the community and to bring in potential customers.

Eventually Shout will likely have a transaction fee, but right now the company is focusing on growth.