Humin, the app that aims to replace your iPhone contacts app is now in the App Store. Will.i.am, Richard Branson and Angry Birds creator Peter Vesterbacka were all part of the private beta launch a few months back. The app is now ready for everyone with an iPhone today.

Humin hooks into your phone, Facebook and LinkedIn contacts and combines them with your calendar, email and voicemail to provide context to all those people listed in your phone.

It’s a similar concept to LinkedIn’s recently launched standalone Connected app in that it tells you key information about each contact such as where you first met, where they work and how you’re connected. Like Connected, it also alerts you to when you will next meet up and when one of your contacts has an update or is visiting your city. Humin gets a bit deeper into your contacts than Connected does. Connected is designed to help you keep up with professional connections, whereas Humin is both personal and professional. It provides info on when you last hung out, which friends you have in common with your contacts, what city the person is currently in and even if they are available to hang.

“Think of it like page rank for people,” explains Humin’s co-founder and CEO Ankur Jain. Every set of search results is ordered to show relevant people based on the user, time of day, place, etc. Say you can’t remember someone’s name; you just type in the search bar “met today” or “met last week.” “It’s designed the way you think,” says Jain.

Jain, by the way, is the son of Intelius CEO Naveen Jain. Intelius sells lists of public records. That is, public contact information. This might have been part of Jain’s inspiration for an app that combines all of your personal phone content to give it context.

Jain tells me the Humin team started out thinking they’d work on the clunky phone contacts system we currently deal with. It was about the contacts themselves. According to Jain, our current way of looking up phone contacts is archaic. “People forget but the entire Internet used to be organized in alphabetical lists and categories on sites like Yahoo and Alta Vista and Lycos,” Jain says. But new search engines like Google started putting search into context. He soon realized it wasn’t a contacts issue, but a contextual search issue. “I wanted to create a way to find your connections the way you actually think about them,” says Jain.

While hooking up your phone’s contact info is a requirement, you have to be willing to divulge info from networks such as LinkedIn and Facebook to provide more social context to your friends. Privacy will most likely be a key concern for users of the app for this reason. “The app shouldn’t send out any messages to friends unless you ask it to,” says Jain.

However, the app will ask you if you want to verify contacts. If you click that you do, it will send an email to all your contacts in your phone. Jain was quick to point out that you can stop the process by going back to the verify modal and clicking “stop” should that happen. Humin says it encrypts and anonymizes all info gathered about you and your contacts.

So how well does it work? A simple search of my boyfriend’s contact info didn’t reveal much. He’s a private person and doesn’t post much. So then I typed in “bar dude.” No one. “OkCupid” search brought up two people. One of them, “Dylan from OkCupid” didn’t reveal much either. Did we even actually meet? I don’t remember this person. Other, much more social friends of mine revealed a lot more. Humin told me I last hung out with a friend at her half birthday party. All the info provided is taken from your calendar or already publicly displayed on one of the social networks the app pulls from. 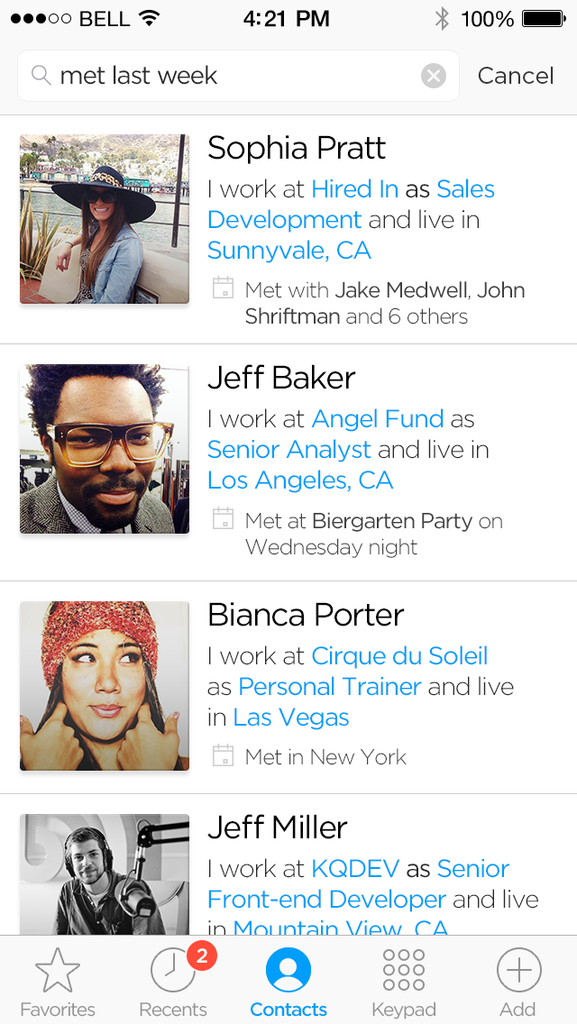 Jain tells me Humin learns what’s most relevant to you over time and the more you use it. Add a new contact via the app and it will begin to provide relevance around that new contact such as the geo-location where you met and when that was and then scour through each of your contacts to reveal who you know in common to provide a deeper connection. I added Jain into contacts in the app just by his number. His name and info, including the 17 friends we happen to have in common, immediately popped up. His name and contact info are neatly stored within the regular iPhone contacts app as well.

Humin will eventually make its way to Android and even Google Glass at some point. Jain also hints at further developments down the road such as adding Humin as an app in cars. “We would become an overlay to navigation,” he says. Jain believes Humin is fulfilling the same promise Steve Jobs made about the iPhone contacts app back in 2007, to use contacts “like never before.” “We’re building a system to put people in context of all these connected devices,” says Jain.