The Westboro Baptist Church, the group known for its hate-filled picketing outside the funerals of soldiers and those who died of AIDS, has found a new target – the tech industry. The group plans to picket pretty much every major tech company in Silicon Valley from Facebook to Reddit this afternoon.

In what looks to be a press release created in Microsoft Paint, the WBC released a statement saying it would be condemning tech companies for supporting gay rights. 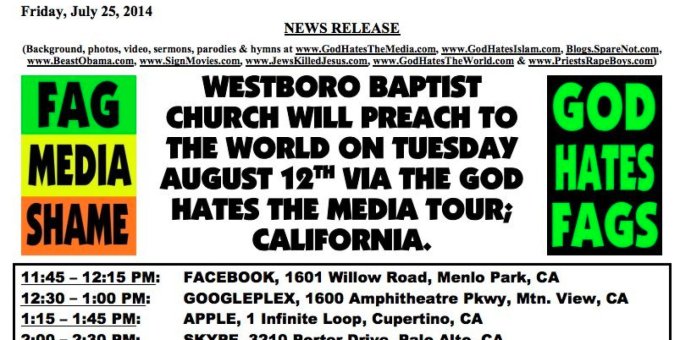 The group specifically targets several tech leaders, including Mark Zuckerberg because he, “…uses every ounce of his ingenuity to find new ways to cram sodomite propaganda down everyone’s throats.” The group seems to have issues with Zuckerberg for supporting San Francisco’s Gay Pride festivities.

The WBC website picketing schedules says it will start with Instagram, move on to Facebook, Google and several other tech companies on the Peninsula and then head up to the city for more tech protests, starting with Twitter.

Tech community members have put up a “Kiss in Protest” event on Facebook, inviting all of SF to counter Westboro’s vitriol with love this afternoon. That all starts at the scheduled Twitter HQ protest on Market Street at 3:50 pm.

Reddit wasn’t originally on the schedule but was added after an AMA (Ask Me Anything) on Sunday that went just as badly as one would expect it to. The Reddit community encouraged folks to ignore the AMA. The WBC says God gave Alex Ohanian and Steve Huffman the power to create Reddit for his glory, not theirs. “[Alex Ohanian] should have used that opportunity to say “God ALONE is in charge of the Internet,” the site reads. The group now plans to picket Reddit HQ in San Francisco this evening at 5:35.