At first, what Theorem does sounds like what a lot of other companies do: It’s an online marketplace for well-made, higher-end clothing and accessories. But Theorem comes with a very interesting twist: The price of each item is up for negotiation. Buying something on Theorem hearkens to the kind of give-and-take that’s been practiced in flea markets and bazaars for centuries, but brought online and into the modern age.

At Theorem’s beta launch in April, the San Francisco-based startup had just two staffers — cofounders Ryan Jackson and Adam Roberts, pictured here — it was completely bootstrapped, and had only a handful of merchants who agreed to list items on the site. But even in those early days, it was apparent that Theorem had a lot of what it takes to be on to something big.

So far, things seem to be headed in the right direction. Now a part of Y Combinator’s Summer 2014 class, Theorem has polished up its product and user interface, doubled in staff size to four full-time employees, and increased the number of merchants selling items on its site to more than 50, with thousands of products on the platform.

In an interview last week, Jackson and Roberts told me that their company’s larger vision now is to become the “Priceline for fashion,” bringing the name-your-own-price model to a new type of market, and letting independent brands benefit. Roughly 60 percent of offers presented by shoppers on Theorem are being accepted by merchants at the moment, giving growing independent brands an outlet for selling items to a new customer base, without diluting their carefully-crafted images.

Embedded below is what a shopper sees when bidding on a Theorem item: As a shopper, you tell the brand exactly what you would pay for an item (offers can’t go below 50% of the list price), and the brand then decides whether or not to accept it. As I wrote at Theorem’s beta launch in April:

“There are subtle differences that make Theorem more special than the classic auction model. Theorem negotiations don’t automatically go the highest bidder, or drive the price down to the lowest common denominator. When I first saw it, I thought it is more reminiscent of the Goethe Auction, or the Becker-DeGroot-Marschack method. It’s a more complicated negotiation scheme than what you see on eBay, but it’s also one that might actually create the best outcome for both buyers and sellers.” 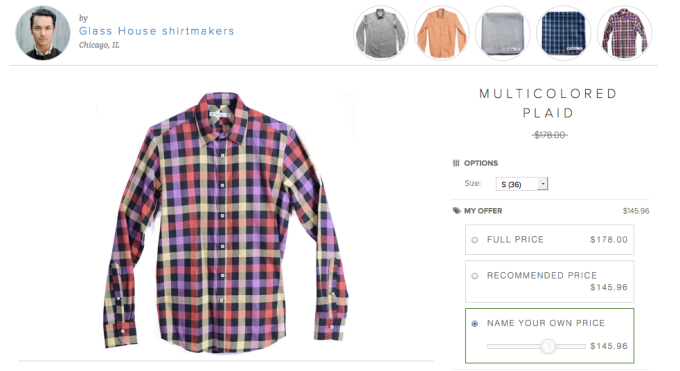 “These brands typically don’t offer discounts, but they do with us, because of the blind auction aspect. We’re not publicizing how much they’re selling the items for,” Jackson said. “On Theorem they can discount more heavily than they ever will in their stores.” Theorem takes a variable cut on each item sold through the platform, depending on the quantity sold and the item’s price. The company hasn’t set an official commission rate just yet, as it’s working on its business model.

Theorem’s blind auction aspect also provides a way for brands to perform the kind of valuable market research on pricing and products that is typically only accessible to large brands and corporations. Brands accept offers in batches, so that lowball offers tend to be evened out by higher ones. In the future, Jackson and Roberts say that they’ll be working on building even better analytics tools for merchants, so they can derive more value from the platform.

“It’s becoming clear that we have the ability to become this data company, and to pull this relevant information that hasn’t been available to anyone before, aside from huge companies like the Gap,” Jackson said. “We can tell a brand: ‘Here was your lowest accepted price, and here are how many offers that were within five or 10 percent of that, and how much money that would have been worth.’ We can show all of this data in a way that’s accessible and actionable.” Having this kind of information could be the difference between a company that fails, and a company that thrives.

Though Theorem focus right now is completely on building out its own flagship site, it could make sense in the future to offer its price negotiation platform as a white label offering for other retail brands to use on their websites, much like Tilt has done with crowdfunding.

Theorem is still definitely in the early upstart stages, but it’s a unique idea that could bring some welcome changes to the way that all kinds of things are bought and sold. With a clever concept, technical chops, and an energetic and smart founding team, it will be exciting to see how the company evolves in the months ahead.