YouTube stars are more popular among today’s U.S. teens than Hollywood celebs, a recent study found. Hoping to capitalize on this trend, a new social video network called Groopie has just launched on iPhone, allowing the next generation of vloggers to record video shows with friends, which may include both scripted and unscripted content.

The L.A. and San Francisco-based startup was founded by Fuad Hawit, whose entrepreneurial drive was influenced by his father Andre, a longtime tech startup founder, who sold IDS Software Systems for $50 million in 2003, and later co-founded companies with his son, including gSoft, makers of an early Siri-like mobile assistant, and audio ad network Mixberry Media. 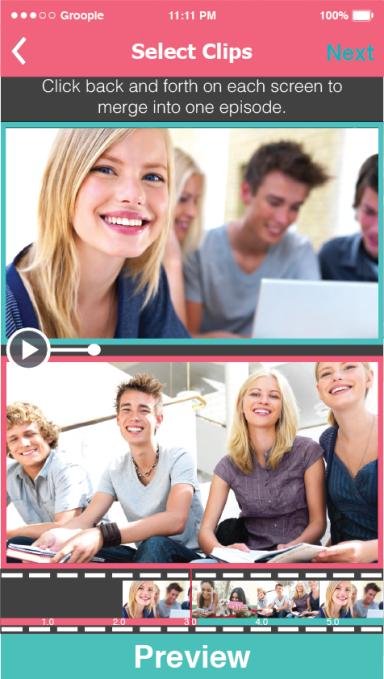 The idea for the app came to him in the pre-Vine days, he says, after watching reality TV and realizing the similarities between that style of programming and today’s social media. He envisioned a service that would let vloggers create video “episodes” together, which would be like independently produced reality TV shows.

An early prototype of the Groopie application allowed multiple users to record video from different locations (even flipping between front and back cameras seamlessly), then merge those videos into one. But unlike competitors who offer mobile video “stitching” apps, or apps like Vine which ask you to start and stop your video shoots in order to tell your story, Groopie works a bit differently, says Hawit.

How It Works: Not Stitching, But “Sync”

“Every other video editing tool is doing it like film-style, where they’re stitching multiple shots together,” he explains. “You have to be a director or script writer to be able to tell a story through multiple video shots…and the rest of those guys come from a desktop video ideology,” says Hawit.

Competitors are offering tools to do effects with video, or overlays, stitching tools, and more, he says.

That is, with Groopie, friends can shoot the episode at the same time, then merge their videos together with a built-in editing tool where you can select which camera angle and audio source you want to use for each shot in order to create one continuous video.

Despite the slight learning curve involved, the process is simple enough for Groopie to already have kids as users, as with the 2nd-grader Alex whose “The Little Alex Show” is already 21 episodes deep.

The company has been running a private beta for the past 6 months, and has signed up 100 testers (Apple’s limit). These include a dozen or so YouTubers, and a couple of reality stars (from the shows “Shahs of Sunset” and “Bad Girls Club”). The current lineup of shows includes reality-style video programming as well as few more scripted shows.

Groopie users each get their own profile which lets them feature their shows, each of which can have an unlimited number of episodes. This setup lets viewers follow the individual shows they like, as opposed to a vlogger’s whole channel. Shows can be shared to Facebook and Twitter, but not published to YouTube, which is by design for this startup itching to become the “YouTube of mobile.” 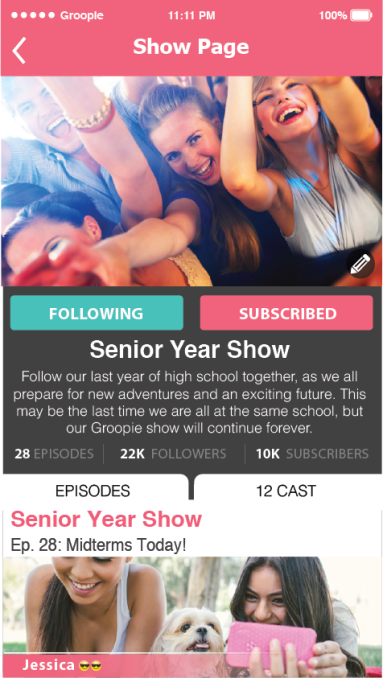 Hawit doesn’t really see Groopie as being disruptive to YouTube, however. But he could see it becoming more like Vine as another place for vlogger stars to grow their audiences. These video creators already know each other, record Vines together and do shout-outs on YouTube, he says.

“They already work together…with Groopie, they can combine followers. That’s going to be stronger than a broadcast channel,” he says. “You take users who have 1 million followers each and you put them together on a TV show – that’s going to be extremely powerful.”

Groopie is backed by $350,000 in funding, from unnamed Zynga, PayPal and Apple angel investors, and others.

The app itself still feels a little rough around the edges in terms of its design, and the content itself is nowhere near as polished as what you’d find on YouTube. But it’s still the early days.

Groopie is free here on iTunes.