In the tech world, we’re used to seeing young entrepreneurs, from Mark Zuckerberg to Evan Spiegel. But not this young.

A group of four middle schoolers from Torrance, California, spent their summer vacation building BankIt, a simple game inspired by Flappy Bird. Their parents wanted them to learn what it was like to be part of a startup, from designing and developing an app to marketing it.

To get the full startup experience, each child took on a different role in the startup, which they called SKYS Studios after their initials. Seia Watanbe, 14, was the app’s designer, and Yua Watanabe, 12, ran product management. Kai Macken 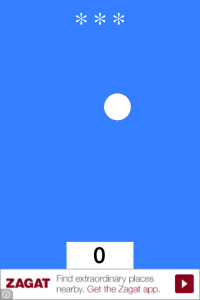 zie, 11, was the programmer, and Sho Mackenzie, 13, led the marketing plan and bravely emailed TechCrunch.

BankIt, now available in the Apple and Google app stores, isn’t too complicated. It has a ball that you swipe toward the top of your phone. You get points each time you bank it off the top before you make it into the white goal box at the bottom. The game keeps track of your top scores, and I found trying to beat mine a little addicting.

But the point of SKYS Studios isn’t the game. It’s to spark an early interest in the technology sector.

As tech company after tech company releases diversity reports, we debate how we can get more girls and minorities to study computer science and apply for jobs in the tech sector. Girls Who Code and other initiatives to bring programming to the classroom are crucial to these efforts, but I like that SKYS went beyond that, showing that working in the tech field can be more than just coding.

“One of the main things I told them during the whole startup camp is that even though it might fail, just try and build something that you are proud of and see what happens. I was happy that they all embraced that message and actually got their app in the Apple and Google app stores,” Harold Mackenzie, the father who oversaw SKYS Studios, wrote in an email to TechCrunch.

I had the chance to interview the young entrepreneurs, who were a bit shy even though Harold Mackenzie tells me seconds before I Skyped in they were throwing things at each other.

Sho Mackenzie, a future Silicon Valley spokesman, told me his favorite part of working on the project was testing different settings, like how the game would be different with multiple balls or different parameters.

Although the app is finished, the kids’ work isn’t done. They have a back-to-school marketing campaign planned in a few weeks, when they’ll use Instagram to promote the app to their classmates.

What’s SKYS Studios’ next move? All four kids excitedly told me that they would want to work on an app again, even though they’re not quite sure what they want to be when they grow up yet.