The conundrum of mobile is you either use one convenient app that is mediocre at doing many things, or you have to discover and hop between a flotilla of single-purpose apps. Vurb wants to solve this for mobile search by aggregating utility from top third-party apps so you can make decisions rather than click links. Today the 2014 Disrupt NY Battlefield winner announced it’s raised a meaty $8 million Series A led by Redpoint Ventures to play David to Google’s Goliath in search.

Vurb is still rolling out its private beta to a big waitlist, and must figure out how to uproot one of our most ingrained digital behaviors. But if everything else changed in the mobile age, why shouldn’t search? 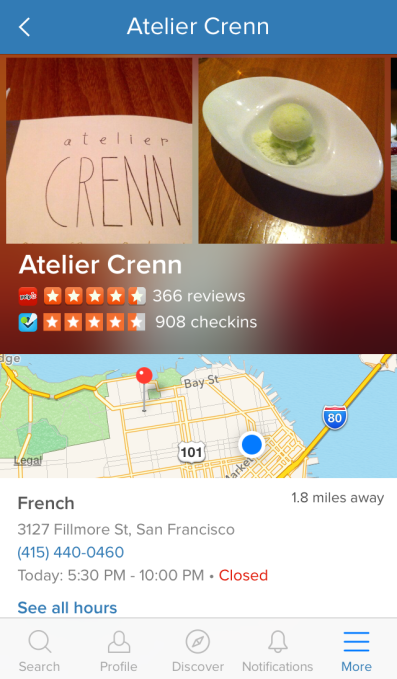 For now it’s focused on places, movies, and media, but is looking to expand to many more verticals including travel and shopping. Vurb tries to anticipate the most common reasons for a search, and splay out the info you might need to take action. Vurb founder and CEO Bobby Lo tells me “Search is a very poor experience on mobile. You have to figure out which app has the right information and have to jump app-to-app to cross-reference information. It’s a really painful process.”

Vurb is different. Search for a movie, and you’ll get IMDb, Rotten Tomatoes, and Flixster scores, nearby showtimes, trailers, cast breakdown, reviews. But say you choose a theater and click through to buy tickets for a specific showtime. One more click of Vurb’s Nearby Places button will show you top restaurants and bars close to the theater that you can filter by type, price, and more variables. Find a nice eatery and Vurb will pull up menus, maps, and an OpenTable booking button.

And you never had to type another word or pop open a bunch of tabs — two actions that are clumsy on mobile.

On the web, juggling services from Google results is a bit easier, but Vurb goes a step further with the ability to save individual cards or whole stacks of them you’ve browsed through. These modernized folders of bookmarks can be referenced later or shared with friends, which is great for collaborative group decision-making. 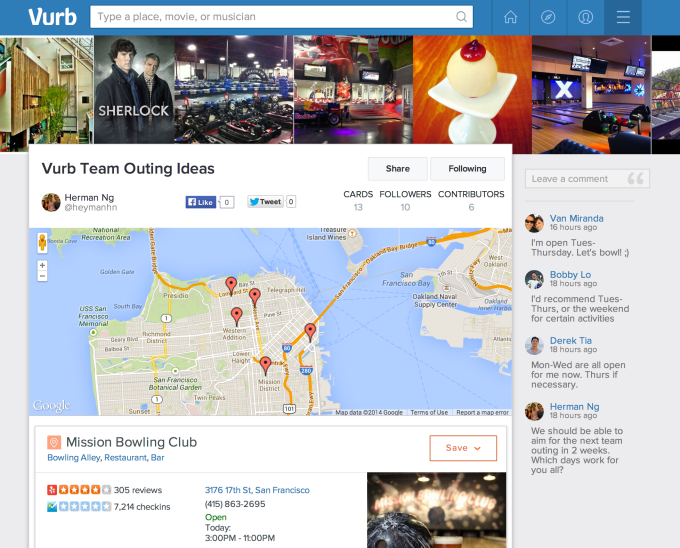 Let’s face it, though. Google has web search locked up tight. The desktop Internet is already an open, free-flowing platform where every site is a quick click away. Aggregation isn’t as valuable. On mobile, though, where content is locked into siloed apps you have to know about and install first, aggregation is quite helpful.

To tackle such a big problem, Vurb raised this new $8 million round led by Redpoint, whose partner Geoff Yang will join its board. The new round brings Vurb to over $10 million in total funding, and includes Stanford University and existing investors Charles River Ventures, CrunchFund (started by TechCrunch’s founder), Atlas Venture, DCVC, and angels including Naval Ravikant, Max Levchin, and Drew Houston. Yang explains his excitement to back Vurb, saying “It is a completely logical experience that matches how our brains work, not how the structure of browsers or apps work.”

The funding will help the seven-employee team expand, continue research and development of the core product, build an Android version, add more search verticals, and upgrade its office. 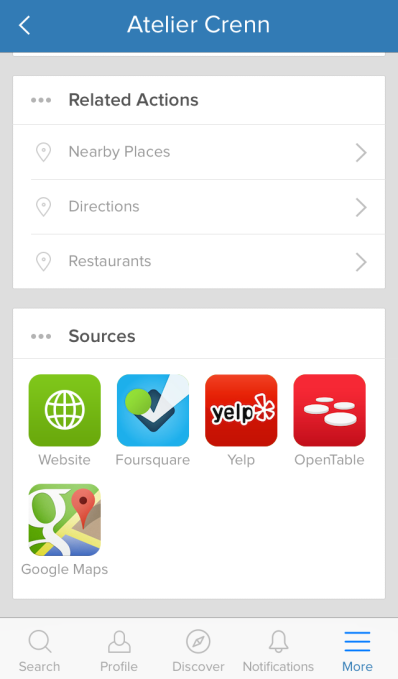 There are two types of apps. Monolithic ones like Facebook that do many things, and single-purpose ones like Rotten Tomatoes that do one thing like movie reviews very well. Each have their issues, as Andreessen Horowitz partner Benedict Evans outlines.

Monolithic apps worked on the web where there was plenty of space, but are forced to bury features in hidden menus because there’s no room on mobile. That makes it easy to forget and tough to navigate to extra functionality. This is why we’ve seen Facebook and Foursquare spin off features into companion apps like Messenger and Swarm. Meanwhile, monolithic apps are rarely best in class. You could try to determine a movie’s quality by looking at its Like count or scant star ratings on Facebook, but Rotten Tomatoes will give you a better answer. People use monolithic apps, though, because they’re well-known and conveniently bundle everything together.

Single-purpose apps are the trend in mobile because people want fast access to functionality. With multi-tasking, it’s just as easy to switch to a different app as it is to dig a feature out of a monolithic one. But this all requires that you know about a mobile app, have downloaded it, and remember to use it when you need it. This slams into the crowded app store problem. And juggling lots of apps to make decision is much harder than keeping multiple windows or tabs open on the desktop web.

I believe Vurb’s opportunity is in bridging monolithic and single-purpose apps to get the best of both worlds. It does the discovery of expert, third-party, single-purpose apps for you and mashes their insights together into cards with everything you need. Lo tells me Vurb’s goal “is not to replace or compete with any of these services because they are the best at what they do, but to provide a new avenue for discovery that branches into these apps.” Vurb could monetize its search engine with tried and true channels like keyword ads, sponsored placement, and affiliate fees.

Vurb’s success may hinge on being a platform that single-purpose apps want to integrate with. If it pisses developers off by aggregating too much of their content while driving back too little traffic, they might block Vurb. If they can cooperate, though, Vurb has a chance to one-up Google. Apps like Baidu Maps are already using this platform strategy in China, hoping to solve any use case related to theme like location by pulling in taxi hailing, restaurant reviews, and appointment booking.

Search is a huge theme to rebundle, and Google is a juggernaut. Betting on Vurb is very risky even if the upside potential is enormous. But that’s what venture capital is for. While Evans was talking about the Chinese aggregated apps, the same thought could apply to Vurb’s opportunity to become a rebundled portal for the mobile age. “Is this what Yahoo might look like on mobile now if it hadn’t spent a decade asleep?”