On-demand ride-sharing startup Lyft is launching a new product in San Francisco today that it hopes will get more people using its service. Called Lyft Line, the product is designed to lower costs for passengers by having multiple people ride together when they share a common route.

Lyft Line was built with help from the team behind Rover, the Y Combinator-backed startup that tried to bring together multiple transportation options — whether it be walking, biking, taking public transportation, or even using one of the new ride-hailing apps that were on the market. According to Green, the founders had discovered and were using an undocumented API to connect with Lyft and determine the nearest ride.

Normally in these cases, a company would just cut off access to the API and call it a day. Rather than do that, the guys at Lyft got to talking with the guys at Rover and they decided to work together instead. The result was that Rover founders Lev Popov and David Dryjanski joined the Lyft team and began working on Lyft Line.

For Lyft users in San Francisco, Lyft Line will appear as yet another option users can toggle between when trying to hail a ride. When chosen, passengers select their starting point and end point, and the number of passengers they’ll be riding with. The app actually tells passengers the cost of the ride upfront, and Lyft says that fares could be as low as 60 percent off depending on where someone starts or is going.

When a Lyft picks a user up, the expectation will be that the passenger is at their front door, ready to go — no lollygagging. The reason for that is pretty obvious: The shared ride service is dependent on passengers being on time to make it work, otherwise everyone’s late and frustrated and grumpy. Drivers will wait for up to a minute for a passenger, but after that will move along to the next stop. 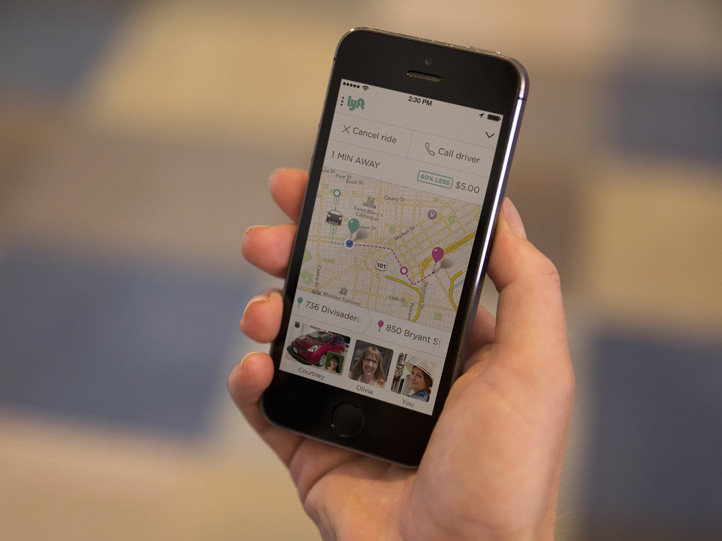 For passengers, the amount of the discount actually depends on an algorithm that Lyft is running on the backend to determine the likelihood of a match. If it’s determined that there’s a low chance of finding another passenger to share the ride, the discount will only be about 10 percent, according to John Zimmer, Lyft co-founder and president.

On the other hand, if multiple passengers are likely to be nearby, the discount will be much steeper. Lyft is touting the possibility of a 60 percent fare reduction on the top end, but for passengers traveling between relatively well-trafficked areas of San Francisco — i.e. the Mission, SOMA, the Financial District, and the Marina — discounts will likely be in the 30 percent to 40 percent range.

So it’s obvious that Lyft Line could be good for passengers who want to save a few bucks on each trip and aren’t afraid of sharing a ride, or those who aren’t entirely time-constrained in getting where they need to be.

The product will also be good for drivers, who will benefit from a general increase in the number of fares and the average length of each ride, since both of those aspects mean a larger amount of revenue that they’re receiving from passengers. According to Zimmer, Lyft Line will be available for all San Francisco drivers at launch, so they will all benefit from the rollout.

Most importantly, though, this product might be good for Lyft, which benefits from increased fares that could enable it to start once again collecting a commission.

Earlier this year, Lyft cut its fares to grow usage and share in the 65 markets that it serves throughout the country. But to do that, the company cut its share of all passenger fares effectively to zero. That means drivers wouldn’t see a hit from the decreased fares, which is important because drivers are the lifeblood of its business.

With Lyft Line the company could not only increase the fares that its drivers collect, but in doing so, have the flexibility to reinstate the commission structure that it had previously.

Lyft isn’t the only player in the space to launch rides with multiple passenger pickups along the same line. Yesterday Uber announced a similar product, called UberPool, which would allow its passengers to shave 40 percent off of their fares by agreeing to share a ride. And we’ve previously written about Hitch, a company that actually launched with the same idea.

When Lyft gathered together a group of the San Francisco tech press to demo the app and to discuss the idea behind Lyft Line, it’s unlikely they expected Uber would announce the same product a day before their launch. After all, even Uber admits in its blog post that UberPool is “rolling out in private beta” with an expansion of that beta occurring 10 days from now.

(For what it’s worth, this isn’t the first time one of these two companies has apparently tried to steal the other’s thunder. A few months ago, Lyft announced that it was adding insurance between rides the day before Uber was set to announce something similar. One good turn deserves another, I guess.)

Everything Old Is New Again

When I first met Green and Zimmer two years ago, it was at the launch party for a new product that their startup had built. They had spent the previous five years building Zimride, a carpooling platform to help users find others who were going in the same direction so they could share rides.

Zimride was founded with the simple goal of increasing the occupancy rate of vehicles on the road. About 80 percent of seats in cars go unused at any given time, and Zimride was singularly focused on reducing that number. But the platform at that point was mostly used for long-haul trips — that is, rides between places like San Francisco and Tahoe or Los Angeles and San Diego.

The problem was that those trips didn’t happen that often.

The launch of Lyft was supposed to solve that problem, by increasing the density and availability of cars passengers could connect with. The new product was essentially an Uber clone, but with a twist — instead of partnering with licensed taxi or black car drivers, Lyft would allow members from the Zimride community to drive each other around.

I mention this all because, if the company’s founding mission was to increase the occupancy rate of cars driving around, Lyft Line gets us a lot closer to that goal than either Zimride or the first version of Lyft ever would.

Changing The Face Of Personal Transit

Nevertheless, it’s probably worth noting that Lyft Line is basically the truest manifestation of the company’s founding principle, which was to increase the number of passengers traveling in a vehicle at any one time. With the new product, Lyft will support up to four people in a car — that is, three passengers and one driver — which would massively boost the occupancy rate that Zimmer and Logan were so concerned with when they launched Zimride.

“Instead of public transit, we’re building what we call personal transit,” Green said at the press event a few days ago.

By massively lowering the cost and increasing the convenience, Lyft Line could be an alternative to public transportation, which is slow and inefficient. But the bigger picture is that Lyft Line could potentially make owning a car and commuting by oneself obsolete, and that’s what the founders are really hoping for.

In a place like San Francisco, which is relatively small and has a decent (but by no means great) public transit system, Lyft Line could be a nice way to skip taking the bus or worrying about finding parking near your office. But in a place like Los Angeles, where the highways are full of vehicles with just a single passenger, offering an affordable alternative to driving alone could be a game changer.

After all, that’s what these guys have been hoping to do all along.