A majority of a doctor’s time is spent jotting down notes about a patient for the next doctor on duty  over and over again with a pen and paper, according to Dr. Jeeshan Chowdury. His new Y Combinator-backed startup, ListRunner, promises to eliminate this paperwork with a mobile app.

You’d think this problem would have already been solved with modern technology. We have smartphones and iPads now for this, right? But using most modern tech to communicate a patient’s private info to each doctor violates privacy and isn’t HIPAA-compliant .

That’s not good enough for doctors like Stanford Hospital surgeon Matthew Wetschler, who says you have to go back to your desk to enter something or use a really backward system. So doctors end up using pen and paper when they are actually face-to-face with patients.

ListRunner, on the other hand, creates a digital record within the app that can be taken on-the-go and shared on a private network with other doctors. It works on both iOS or Android and it stays on, even if your phone hits a dead zone or isn’t near Wi-Fi. The most important part here, though, is that the app is HIPAA-compliant. 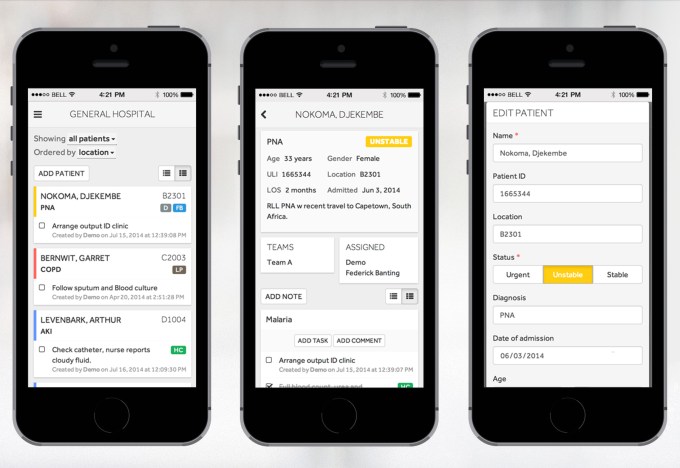 “We call ourselves scut monkeys sometimes because we are buried in paperwork and writing things over and over again instead of actually attending to the patient,” Chowdury tells me. Scrum, in his meaning of the word, is menial tasks with incremental impact that you do over and over again.

A Rhodes Scholar with a an MD and a Ph.D. in medical information systems, Chowdury was finishing med school when he first noticed this flaw in the hospital system. It wasn’t until he got involved in health hackathons that he figured out how to solve the problem doctors had with paper. He and his co-founders, engineer Dominic Savoie and Dr. Trevor Chan, were participating in these health hackathons together when the three started discussing joining forces.

In order to be useful, the app had to be reliable, HIPAA-compliant, work on any device, protect privacy and work offline in case of emergency or lack of Wi-Fi. One very basic prototype later and ListRunner debuted for the first time at a Hacking Health event in Capetown, South Africa.

They shut the app down after its debut, thinking it was just a prototype that needed building out. “We started to get all these complaints that the app wasn’t working,” says Chowdury. “We had no idea people were actually using it. There just isn’t anything else out there that lets you keep sharable, digital records while you are actually interacting with your patients.”

Dr. Corey Rood, who works out of Children’s Medical Hospital in Columbus, Ohio, was a bit skeptical. “I don’t know that many entities would feel comfortable having secure medical info on cell phones, even through an app.” His main concern seemed to be fitting all that info into a small space on your smartphone.

Chowdury said that was a common question.

“Most of the doctors we speak to, want to display as much information as possible on one screen on their phone because they are used to a paper sheet. In fact, I always say that our biggest competitor is paper.” Co-founder Savoie put it like this: “It’s like if you printed out your emails in the morning, answered them on paper with a pencil, and then would type them back in Gmail at the end of the day. The EMR isn’t designed to help teams collaborate at the ward level. ListRunner is more like a bug tracker or project management tool whereas the EMR is more like a wiki with the official info.”

Chowdury showed me how doctors fold the note paper they use in half and want just a certain amount of info to fit all on one part of the page. He then told me that over 80 percent of medical error happens with miscommunication during hand-offs. The Center for Transforming Healthcare also confirmed those numbers.

Wetschler believes something like Listrunner would be very useful to him. “You can’t expect us to just drop how we work in the real world when we get to the hospital. We use our smartphones to communicate. I guarantee you doctors are still texting each other about patients because of this, whether they admit it or not.”

The ListRunner app just released a private beta version, which is being tested in 15 hospitals worldwide. “The rapid adoption in South Africa taught us to do a slow rollout while we test and make it better,” Chowdury says. “A lot of the info doctors put on this app is mission critical.”

The team plans to show off what they’ve created at Y Combinator Demo Day on Aug 19 at the Computer History Museum in Mountain View, Calif. Those interested can get an early demo by clicking here.