Facebook, Google and Twitter recently released their own diversity reports. Only about 10 percent of tech employees are female at Twitter, and the numbers aren’t much better at Facebook and Google, at 15 and 18 percent respectively.

eBay may be experiencing slightly higher rates of gender diversity than its peers due to proactive recruiting measures the company has taken. Three years ago, President and CEO John Donahoe launched the Women’s Initiative Network (WIN) to “attract and engage women to build lasting careers at eBay.” The result: The number of women in leadership doubled, and now 28 percent of the company’s leaders are female.

This is a promising sign, as tech companies rolling out diversity numbers commit to adopting similar initiatives in an effort to diversify their staffs. 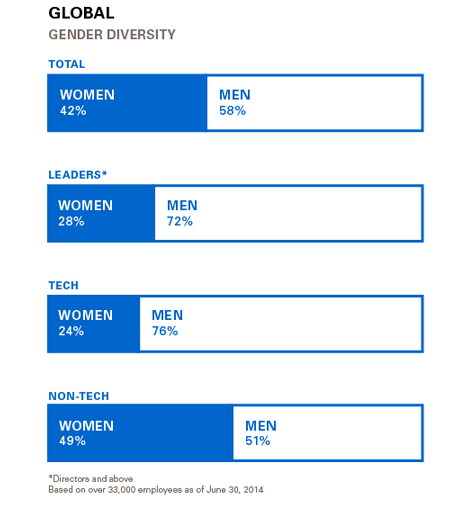 When it comes to ethnic diversity, it seems the company still has some work to do. Although in all positions, 7 percent of employees are black and 5 percent are Hispanic, that number dips when looking at tech and leadership positions specifically, where each ethnic group makes up 2 percent of employees.

More than half of tech employees at Facebook, Google and Twitter are white, but at eBay, Asian employees are the most well-represented ethnicity in tech positions. 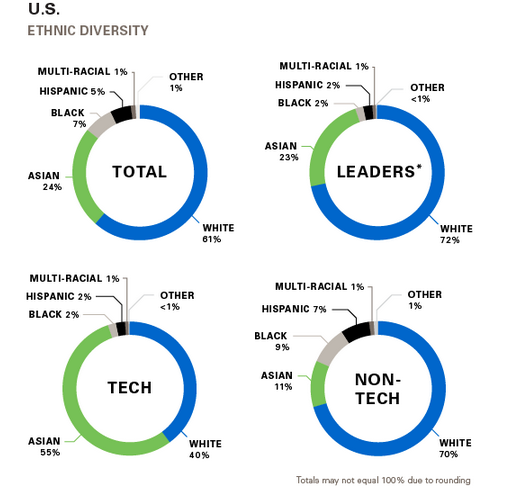