There are plenty of meme generator apps around. Imgur’s Memegen immediately springs to mind. Or something more quirky, such as Yarrly, the anonymous chain letter-styled meme generator for Android. But what the world really needs is a meme generator for the beautiful game. And now, thanks to Gliff, it finally has one.

The iOS and Android app is the work of the team behind TheGliff.com, which wants to be the Buzzfeed of soccer, and itself spun out of incubator Out Of View, the business lab founded by hedge fund veteran Lee Robinson of Trafalgar Asset Management and Altana Wealth Management. Other startups to hatch from Out of View include Nexus Club and Quibly. 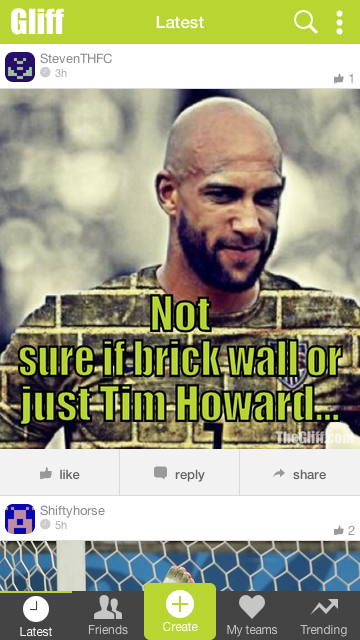 Like other meme generators, Gliff lets you upload a (football-related) photo of your own, or search for one through the app via a tie-in with Google image search. You then type your caption — hence making it a meme — and share it to the main Gliff stream.

In addition, you can follow memes specially related to the team(s) you support, which is a nice feature.

But perhaps the best part of Gliff is that users can comment on or like memes within the app, making for a potential football community in and of itself.

“We intend for people [to] use it in a couple of different ways,” says The Gliff editor Scott Collen. “Initially to post/find fun football ‘Gliffs’ (a meme in disguise) but because we allow fans to reply and comment we see it turning into more of a Twitter conversation.”

That’s also where the startup hopes to generate revenue. I’m told native adds in a user’s stream are the order of the day, should the app take off.