Here’s a neat idea aiming to bridge the gap between older generation technology and today’s ubiquitous touchscreen smartphones. Case Remote is a wireless remote controller for DSLR cameras which links to an Android or iOS smartphone, allowing the camera kit to be controlled via a mobile app.

Why would you want to do that? It’s a hands free way of controlling the camera after you’ve positioned it where you want it to take a shot, for one thing. It’s also arguably a nicer way for beginners to play around with fine-grained DSLR settings, instead of having to get their head around multiple on-camera physical controls and gnomic camera menus. Point is, people are getting more comfortable with smartphone touchscreen controls than physical dials and buttons.

The app also offers a shortcut to sharing your best quality shots online, since you can download a photo straight from the camera onto your mobile device and share it from there in the usual way, to your social outlet of choice.

The Case Remote companion app offers a live view of what the camera is seeing on the mobile screen; the ability to set and tweak controls such as ISO and shutter speed; an option to wirelessly download photos to your mobile device; the ability to zoom in to the full high res shot, to check how it came out; and a set of more advanced features including time lapse, HDR and focus stacking.

The device is compatible with a range of camera makes and models — offering a compatibility advantage over proprietary apps made by individual kit makers. Supported models include a long list of Canon and Nikon cameras from the EOS Series, PowerShot, D Series and 1 Series. However its makers say it’s not stable with most Sony and Panasonic kit. 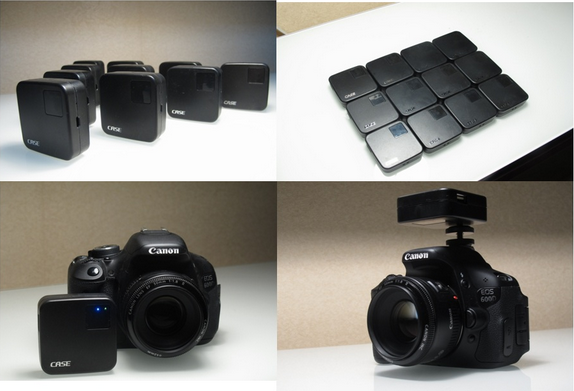 It’s worth flagging that Case Remote’s makers are currently running their second Indiegogo campaign for an upgraded version of the device, as a follow up to a campaign they ran earlier in the year for a less full featured version which still hasn’t shipped to backers. They are now intending to ship the beefier Case Remote to all earlier backers, plus any new ones they acquire, this September.

The price-tag on the Case Remote is $79 to early Indiegogo backers ($99 or $129 thereafter), which includes accessories such as a hot shoe adaptor and a strap wire. That makes it considerably cheaper than rival wireless camera controllers — which can cost in the $200 price range. It’s also claiming to be smaller and lighter than other wireless controllers, sized at 2 x 2inches and weighing in at around 50 grams.

The Indiegogo campaign for Case Remote is a flexible funding campaign, meaning there’s no target they need to hit to ship. Their prior crowdfunder pulled in nearly $39,000, well over the original $15,000 target. At the time of writing, their second bite at the cherry with a more polished but later shipping finished product has pulled in over $12,000, still with 24 days left of the campaign to run. So all they need to do now is actually deliver the goods on time this time.