Some Instagram users are reporting having briefly seen a banner advertisement within the Instagram application which pointed to a new app called “Bolt,” described as a “one tap photo messaging” app. Next to the app’s name and description, a download button linked out to a non-functional URL on the Google Play store.

The current speculation being shared around the web is that Bolt is a new application soon to be released by Instagram. However, it also seems likely that the Bolt leak was a test involving an expansion of Facebook’s app install ads to the company-owned Instagram platform. 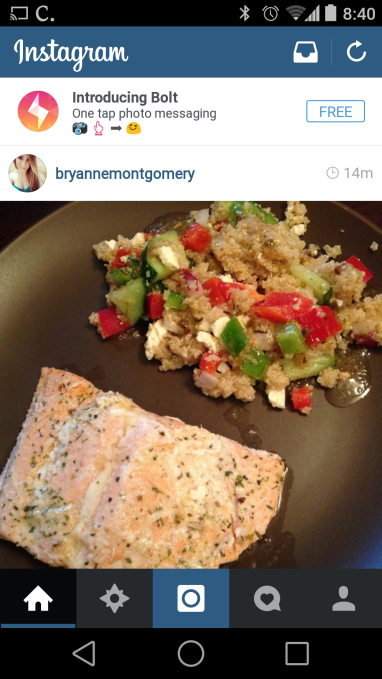 The existence of Bolt was first brought to our attention by TechCrunch tipsters, who sent in screenshots to our tips line late last night. One tipster even proclaimed: “They’re coming at Snapchat again. Guaranteed.”

News of Bolt’s odd debut has also been picked up by a number of sites, including The Verge, Business Insider, Gizmodo and others. The company has yet to officially comment on the matter.

There is already a mobile application on the Google Play store called “Bolt” but it’s a mobile calling app. Despite having a similar, pink-hued lightning bolt icon, we’ve confirmed that this Bolt is not the Bolt in question.

The current assumption that Bolt is an Instagram creation makes sense, given that taking on Snapchat has clearly been a big focus for Instagram’s parent company, Facebook, which also recently launched a picture messaging client called Slingshot. And Slingshot, too, was accidentally revealed by going live a bit earlier than planned. One could joke that someone at Facebook has “slippery fingers.”

In addition, Facebook Messenger product manager Peter Deng moved over to Instagram last year, which could have influenced the service’s newer emphasis on messaging.

And finally, TechCrunch has been hearing that Facebook has some “big stuff” planned for next week, and the launch of Bolt could be part of it.

That being said, it’s worth pointing out that there’s nothing in this leak that specifically confirms that Bolt is a forthcoming Instagram-owned property. The placement of the banner ad at the top of the user’s stream could also very well be a test of app install advertisements.

Mobile app install ads have proved to be an extremely profitable business for parent Facebook, though the company tried to downplay that during its earnings announcement yesterday in order to make its mobile ad offerings seem more diverse. However, the company made $1.66 billion in the quarter from mobile ads, which now account for 62% of Facebook’s ad revenue.

Bringing those same advertisements to the Instagram platform seems like an obvious next step for Facebook, especially given the wide network of third-party mobile applications that offer up some sort of Instagram integration. These app businesses would likely love to be able to target the Instagram crowd specifically, especially since they are often trying to reach a younger demographic like those that favor Instagram.

Or, even if Bolt is the next app from Facebook, it’s interesting to see how well Instagram could serve as a promotion tool for linking users to that application – and, maybe one day, to others.

Some Instagram users are reporting having briefly seen a banner advertisement within the Instagram application which pointed to a new app called “Bolt,” described as a “one tap ph...
Aero, a startup backed by Garrett Camp’s startup studio Expa, has raised $20 million in Series A funding — right as CEO Uma Subramanian said demand for air travel is returning “with a v...
People are not only shopping digitally more than ever. They’re also shopping using their mobile phones more than ever. And for mobile-first companies like Snapcommerce, this is good news. Snapcomme...
Remote working — hiring people further afield and letting people work outside of a central physical office — is looking like it will be here to stay, and today one of the startups build...
Fresh off the termination of its planned merger with Visa, Plaid announced Thursday a new income verification product, which it said is aimed at “improving the lending lifecycle” with payroll data....
This morning Square, a fintech company that serves both individuals and companies, announced that it has purchased a majority stake in Tidal, a music streaming service. The deal, worth some $297 mi...
SpaceX has launched another batch of its Starlink satellites – the usual complement of 60 of the low Earth orbit spacecraft, which will join the more than 1,000 already making up the existing const...
This morning Hopin, a virtual events platform and video-focused software service, announced that it has closed a $400 million Series C. The new capital values Hopin at $5.65 billion. Both numbers m...
There has been a rapid proliferation of roll-up companies armed with wallets full of money to consolidate promising smaller merchants that sell on Amazon and other marketplaces, the idea being to c...
Wipro said on Thursday it has reached an agreement to buy 22-year-old British tech consultancy firm Capco for $1.45 billion as the major Indian software exporter looks to win customers in Europe an...
Apple is facing another antitrust investigation in Europe into how it operates the iOS App Store. The UK’s Competition and Markets Authority (CMA) announced today that it’s opened an in...
China’s relaxation of its one-child restriction has not delivered the population targets set by its policy planners. In 2019, the birth rate in China slumped to a seven-decade low, which expe...
Food delivery start-up Deliveroo has today confirmed its £8bn ($11bn) stock market floatation in London, something which was on the cards previously. The eight-year-old company will use the “dual-c...
Bolt, an Uber competitor that is building an international on-demand network of services to transport people, food and other items in cars, scooters and bikes across Europe and Africa, has picked u...
Countingup, the U.K. fintech offering a business current account with built-in accounting features, has closed £9.1 million in Series A investment. Leading the round is Framework Venture Partners, ...
WhatsApp is rolling out support for voice and video calling to its desktop app, the Facebook-owned messaging service said Thursday, providing relief to countless people sitting in front of computer...
Payfazz and Xfers, two startups that want to increase financial inclusion in Southeast Asia, announced today they have joined forces to create a new holding entity called Fazz Financial Group. As p...
Of all the gin joints etc. etc. Clubhouse continues to confound those who don’t believe in the restorative powers of the Next Big Thing. It doesn’t make sense, they say, that an audio s...