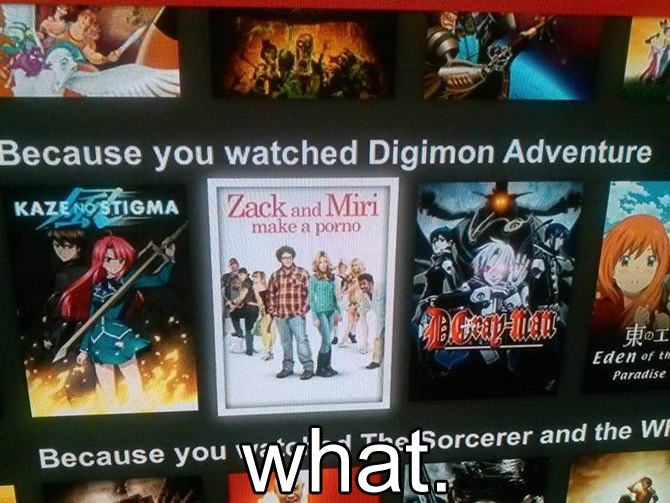 Maybe you want to watch Phineas And Ferb on your lunch break without catching flack for it from your buddies later.

Maybe you share a Netflix account with your parents and don’t want to explain what Lars And The Real Girl is all about next time they have you over for dinner.

Maybe you promised your significant other you’d wait to watch the last new episode of Orange Is The New Black and, er, didn’t.

Whatever your reason, it seems that Netflix is catching on that not all viewing has to be public/permanent.

Gigaom got word that Netflix is playing with the idea of a private viewing mode. Once enabled, anything you view would neither show in your viewing history, on Facebook (if you’re one of the few people who actually tied Netflix into Facebook), nor affect what Netflix recommends for you moving forward.

With that last bit — that what you watch in “private” mode doesn’t impact recommendations — Netflix has found a solid, family-friendly way to pitch the feature beyond just hiding your viewing shame. Don’t want your kids’ Dora binge-watching sessions to convince Netflix that you would totally dig Go Diego Go!? Problem solved!

The bad news? While they’ve confirmed that they’re dabbling with the idea by offering it to select users, Netflix won’t make any promises about when (or even if) it’ll show up for everyone else.