If you’re like me and find Citi Bike to be a relatively expensive transportation option, Skyride may be right up your alley.

The creators of Skylock, Velo Labs, announced details about their new service Skyride, a bike-sharing program that allows users to rent a bike on-demand. They’re looking to price it at $2 per transaction.

Skylock is a connected bike lock that allows the user to control it with their phone. The highlighted features of the $249 lock, which you can pre-order separately at $159 for a limited time, include alerting you if someone is stealing your bike, reporting emergencies if you get into an accident and unlocking the bike with your phone (and allowing your friends to do so). The Skylock is entirely solar-powered.

The central hub for Skyride will be situated in a geo-fenced area in the middle of a city, and once a rider rents a bike and lock from the app, it will unlock as lock detects the rider’s phone. The rider will be charged a flat rate for every 30 minutes of their trip.

The benefit of Skyride as opposed to other bike-share options is that you don’t have to drop the bike off at a specific hub. All you have to do is lock the bike anywhere and the next interested rider can rent and unlock it as they approach. The locks are equipped with a GPS chip, allowing users to find a bike that is not already taken. 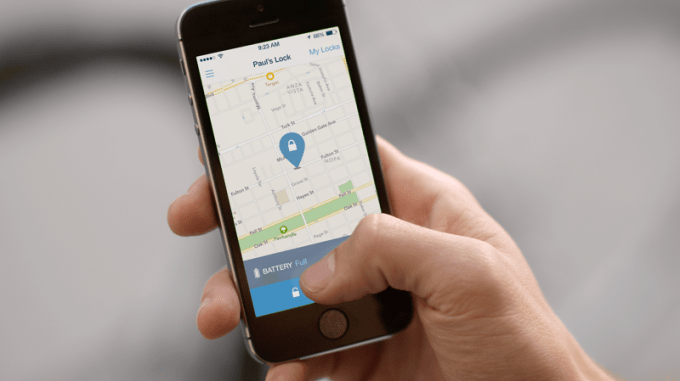 When the bike is locked, the app will ask the rider if they are done with the ride and will stop charging for the session once they confirm.

So if you want to stop by the grocery store for 10 minutes, you can lock the bike and still have it reserved while you shop. Of course, you will be charged for the duration of time that you have reserved the bike.

Moving back to Skylock, it’s important to note the similarity to Lock8, winner of TechCrunch Disrupt Europe last October. Lock8 allows the rider to rent their bike with users of the Lock8 app. It is keyless, alerts you if your bike is being stolen, has integrated GPS and is induction charged. Right now it’s priced at $249.

Jack Al-Kahwati, CEO of Velo Labs, said the company is preparing a pilot program in two unnamed countries in Asia, where they are working with universities, municipalities and companies interested in the bike-share network.

Anyone can earn money renting bikes through Skyride, and affiliates pay a 15 percent revenue share for the use of Skylocks. They plan to release an enterprise version with a subscription tiered pricing plan.

The company plans to use normal bicycles, as opposed to specially constructed ones.

They hope to launch the service in San Francisco first after they determine the success of the pilot program.